Record sale in Maryland as Bernardini colt sells for over $3.5 million

TIMONIUM, Md--A new record price for a thoroughbred sold in Maryland was set at the Fasig-Tipton two-year-olds in training sale at Timonium when a Bernardini colt sold for $3,550,000. 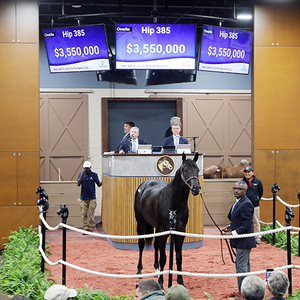 Hip 385This was almost double the previous highest sale in the state.

The 2022 Midlantic Two-Year-Olds in Training sale ended Tuesday in Timonium with an exciting day of sales, featuring early fireworks and robust trade throughout.

But like all sales of late, there seems to be no price too high for the top of the market, but there is little or no interest in the lower part.

"Everyone was there for the big gun horses," said Marshall Silverman, an agent. "There were a lot of nice horses in the sale.But a lot of horses should have sold for more than they did. Overall, it was a good sale, but a lot of people didn't have a good sale.

"I had eight horses at the sale, and I sold one through the ring. Two others I sold after the sale. A couple of the owners race horses, so they kept theirs to race.

"Bernardini was just crazy money," said Silverman. "When you get two people on a horse they just get into a bidding match. Baffert was at the sale, and a lot of out of town trainers. But there were a lot of trainers that I thought would be there that weren't. But it was overall a good sale. People were pumped."

THE SECOND day of the sale was highlighted by the multiple record-breaking sale of a colt by the late Bernardini, marking the eighth consecutive year with a seven-figure sale topper at Midlantic Two-Year-Olds in Training.

At the close of the session, new records were also established for the sale in average and median.

A colt by Bernardini out of G Note, by Medaglia d'Oro. topped the session and sale when hammered down for $3,550,000 to Gary Young, agent for Zedan Racing.

Offered as Hip 385 by Sequel New York, agent for breeders Chester & Mary Broman from New York, the dark bay or brown colt worked an eighth in 9.4 during the Tuesday session of the under tack show.

The sale price is a new high price for a thoroughbred sold at public auction in the state of Maryland, eclipsing the previous record set at this sale in 2019, when subsequent Eclipse Champion Gamine sold for $1,800,000.

Hip 385 also has the distinction of being the highest-price offspring of Bernardini sold at public auction worldwide and is currently the most expensive Thoroughbred offering at public auction globally this year.

The record-breaking colt is out of the winning Medaglia d'Oro mare G Note, who has already produced three winners from as many to race.

Second dam is Grade 2 winner Seeking the Ante, also a 100% winner-producer, whose six foals to race include stakes winner Mineralogist, dam of stakes winner Can You Diggit, and stakes placed Risk a Chance, dam of this year's G2 Rebel Stakes winner Un Ojo.

"Anything can happen at Timonium, and it just did," said Fasig-Tipton Midlantic Sales Director Paget Bennett, on the sale topper. "It just goes to show people can feel confident about bringing that type of horse to the marketplace here in Maryland…. With the 9.4 work and the Bernardini and the New York-bred, Hip 385 had all the ingredients for it to go to seven figures."

A trio of juveniles tied for the session's second-highest price, including:

Hip 364, a colt by popular first-crop sire Bolt d'Oro, sold for $500,000 to Holly and David Wilson from the consignment of Kings Equine, agent.

The dark bay or brown colt is out of the stakes winning Bernardini mare Forever Discreet (Aus), a daughter of group stakes winner She's Discreet, who produced 13 winners from as many to race, including multiple stakes winners and stakes winner-producers.

Hip 364 worked an eighth in 10.0 during the Wednesday session of the under tack show.

Hip 443, a filly by Triple Crown hero American Pharoah, sold for $500,000 to Cherie Devaux, agent from the consignment of McKathan Bros., agent.

The chestnut filly is the second foal out of Grade 3 winner, multiple Grade 2 placed Jordan's Henny, by Henny Hughes.

Bred in Kentucky by Erv Woolsey and Ralph Kinder, Hip 443 worked an eighth in 10.0 during the Thursday session of the under tack show.

Hip 487, a filly by the late Malibu Moon, sold for $500,000 to Maddie Mattmiller, agent for J. Kinchen and Black Type TB, from the consignment of Wavertree Stables, agent.

The gray or roan filly is out the winner Unbridled's Song mare Lorelei True, a half-sister to Grade 2 winner Sparky Ville, from the immediate family of Grade 1 winners Harmony Lodge, Magnum Moon, and Pinehurst.

Hip 487 worked an eighth in 10.2 during the Thursday session of the under tack show (video).

The sale's top-priced filly sold during Monday's session, when Donato Lanni, agent for Michael Lund Petersen, went to $725,000 to secure hip 88, a daughter of first-crop sire Girvin from the draft of Paul Sharp, agent.

"We had a lot of buyers from all over the world that came to the sale," said Bennett. "We had supporters regionally and nationally who came to buy racehorses here. We are tickled to death with these results."

The sale topper was the highest-priced Thoroughbred ever sold at public auction in Maryland, and for the eighth consecutive year, a horse sold for $1,000,000 or more to top the sale.