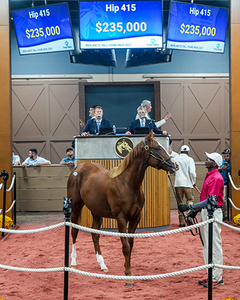 The sales topper by Mendelsohn at the Fasig-Tipton Timonium Yearling sale"It was a good sale," said Marshall Silveman, who, as agent, had consigned 61 horses to the sale. "For me, the middle market was good. People need horses. The foal crop was down, and horses are bringing 20 to 25 percent more than they would have if the foal crop had been bigger. All the sales have been good."

"The purses now are great, and breeders awards are great," said Silverman. "Fasig-Tipton did a good job with this sale."

"It was a very strong sale in the middle market," said Cynthia McGinnes, whose Thornmar Farm sold 18 horses." For regional people, there were a lot of Maryland trainers buying horses, and I think that is because of the Maryland Development Bonus."

The development bonus rewards any person who buys a horses that has not run in Maryland, and owns that horse when it runs in its first Maryland race.

Thereafter, for the rest of that horse's career, any time that horse places first, second or third in a Maryland race, no matter who owns it, that buyer will receive an award of 15 percent of the purse.

"Dale Capuano, one of Maryland's top trainers, said, `Buying a Md-bred is like getting a 30 percent discount because of the 15 percent owner's bonus and the 15 percent developer bonus,'" said McGinnes.

"One buyer said said gave him a better incentive to buy because even if a horse got claimed he'd still have an interest in following it because he'd still get money if the horse placed in a Maryland race," said McGinnes.

"The market for horses selling from $15,000 to $40,000 was strong, and that market usually is not strong," McGinnes said. "That helps regional stallions. I was encouraged. We sold 18 horses, and 14 went to Maryland or Virginia trainers, who will probably run in Maryland."

ON BOTH DAYS, the session toppers were from the first crop of Breeders' Cup champion Mendelssohn.

The colt, sold by Dreamtime Stables, agent. is out of the Malibu Moon mare Tasha's Moon, a half-sister to G2 placed stakes winner Esmeraldina and ls from the immediate family of G1 winner Off the Tracks and G2 winner and sire Concord Point.

Earlier in the session, a son of Belmont Stakes winner Union Rags, bred and raced by Phyllis Wyeth, sold for $220,000 to Mac Robertson, agent for Novogratz Racing Stables

On Tuesday, Scanlon Training & Sales purchased a chestnut colt by Mendelssohn for $235,000 from the consignment of Northview Stallion Station (David Wade), agent.

The colt, Hip 415, is out of Grace Is Gone, a Malibu Moon daughter of G1 placed winner Grace Anatomy, and is from the immediate family of champion Soaring Softly and G1 winner Plenty of Grace.