SARATOGA SPRINGS, N.Y.--Fasig-Tipton's Saratoga Selected Yearling Sales on Aug., 9, 10, ended with a blow-out sale on the closing night, making it the fourth best sale in Saratoga that Fasig-Tipton has ever had. 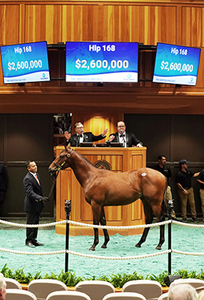 “We felt the magic of Saratoga tonight,” said  Browning. “Whatever adjectives you want to use to describe, fantastic, vibrant, energetic, dramatic, we all felt it tonight. You’ve heard me say it before and I’ll say it again, it all begins with the quality of horses on the sales grounds. We were lucky to have an exceptional group of horses on the grounds this week. You could feel the buzz growing on the sales grounds. Just the way the horses fell, we had a few more breakout horses tonight. The four seven-figure breakout yearlings, including Hip. 73, the colt by Uncle Mo who brought $1.6 million Monday night, were joined by six that sold for $800,000 or more. Overall, 37 sold for $500,000 or
more."

“All in all, it was near record sale in every statistical evaluation, said Browning. "To accomplish that coming off of the disruption of 2020, it’s remarkable. It takes the support of the buyers and it takes the support of the sellers. It starts with the sellers. There’s no chicken and egg in the horse sales business, it all starts with consignors giving you the opportunity to offer quality product. If you offer quality product the buyers will embrace what you’re trying to do. We were very fortunate to have a very, very strong catalog, with very good individuals we’ve worked hard to select and cultivate. I couldn’t be happier right now. It’s a special place. If it wasn’t the sale of the century it was awfully close to it."

FOUR YEARLINGS bred by Doug Black' Blackstone Farm and folaad there, sold Monday evening, hip number 11, a grey colt by Arrogate out of Too Much Malibu, by Maliibu Moon sold for $300,000, number 24, a   chestnut colt by Gun Runner out of Wembley, by Bernardini, was bought by Gretchen and Roy Jackson's Lael Farm for $550,000, number 46, a bay colt by Street Sense out of Bella Traviata, by Indian Charlie, sold for $200,000 and number 90, a bay filly by Justify out of Essential Rose, by Bernadini sold for $625,000.

Black said he was very pleased with his yearling's sales, and that their average price was just over the average price of the sale.

"The Arrogate colt went for just about what we had expected," said Black. "The Justify filly, once you get to over $400,000, yearlings can go for anything (depending on the bidders). There were 12 Justify yearlings in the sale, and Essential Rose's first colt did most of his winning in Canada. The Justify filly is a big, strapping filly, and she would probably have brought more if Essential Rose's first foal had done most of his winning in this country."

Tuesday evening, Black bought back hip number 136, a chestnut filly by More Than Ready out of Lucky Draw, by Lookin at Lucky, who did not reach her reserve of $185,000.

"The first filly out of Lucky Draw had just won her first race at Monmouth by 6 1/4 lengths the Saturday before the sale," said Black. "That didn't make the catalog. "We may move her in October. But I love the filly. I wouldn't mind keeping her to race her."

Black, who has sold at Saratoga a number of times, said that this year's was the best sale there that they had had.

"This was also the cleanest sale we've had," said Black. "They all  vetted well. We just had one we had to scratch. a colt by Hard Spun."

"We're basically a broodmare farm," said Black. "We have just one stallion, owned by Steve Young. We breed to stallions in Kentucky because they sell better."

THE FIRST night session topper, a bay colt by Uncle Mo out of Dame Dorothy, by Bernardini, bred by Bobby Flay, was bought by West Bloodstock, agent, for Robert and Lawana Low for $1.6 million, and has Pennsylvania connections.

The colt comes from one of the families developed by the late Marshall Jenney at his Derry Meeting Farm in Cochranville, Pa.

Derry Meeting bred Dame Dorothy, who Flay purchased as a yearling for $390,000 and campaigned to seven wins in 12 starts including the
G1 Humana Distaff on the 2015 Kentucky Derby Day undercard.

The top 10 lots were bought by 10 different buyers and were by seven different stallions, with two of them by Justify," said Browning. "It was a very solid opening night with a wide spread of bidders."

On Tuesday evening, three yearlings brought over $1 million with the sales topper, a bay colt by Into Mischief out of Paola Queen, by Flatter, sold for $2.6 million to M.V. Magnier.

A bay colt by Bolt d'Oro brought $1.4 million and a filly by Quality Road sold for 1 million.

Browning said the Bolt d’Oro colt and the Into Mischief colt both impressed Fasig-Tiptpn's inspectors on the farms in April.

“The Bolt d’Oro was a special horse,” he said. “The day we walked on the farm my mouth fell open. This is a remarkable horse. The guys on my team were giving me a wink and a nod, kind of like, ‘Go after him right now.’ ”

“When we saw the Into Mischief colt on the farm we were like, ‘This is a got-to-have horse,’ ” Browning said. “He was a majestic physical individual. Even when he walked out of the stall you’re like, ‘dear god, please send him to Saratoga.’ He had the pedigree, he had the
wow physical. We’ve known from Day one he had the opportunity to be a special horse. You don’t know in April how they’re going to finish and mature the next four months, but he was a special horse.”

Hip number 204 Tuesday evening, a chestnut filly by Justify out of Storm Dixie, a half sister to stakes winner Princess of Sylmar, foaled at Betsy Houghton's Sylmar Farm in Christiana, Pa., didn't reach her reserve of $325,000 and wasn't sold.