TIMONIUM, Md.--Fasig-Tipton's Midlantic two-year-olds in training sale, May 17-18, saw record breaking sales, including over 30 percent of the youngsters selling for $100,000 or more. 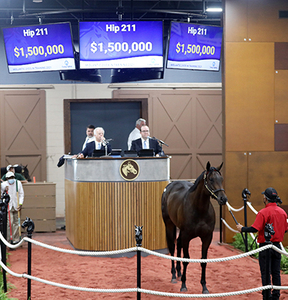 "It was a great sale," said Marshall Silverman of New Freedom, Pa.,, who,, as agent, sold six. "Fasig-Tipton did a great job. There was plenty of money there. It was a super, super sale. There was a low RNA.

"A lot of people did pretty well," said Silverman. "That means they'll have to reinvest that money or Uncle Sam will take it. I look forward to the yearling sale this fall to be a good sale. I have about 50 going to that sale."

The Fasig-Tipton Midlantic Fall Yearling sale is scheduled for Oct. 4-5.

Silverman said he was overall pleased with the way his sales went.

"I thought a couple could have brought a little more, but in general they all brought about what they were worth," said Silverman, who sold a colt by Unified for $150,00 with the rest of his sales averaging in the $50,000 area. 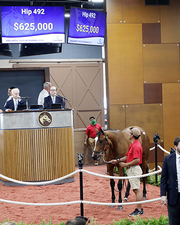 For the seventh consecutive year, the sale topper sold for seven figures, and more than 30 percent of those sold brought $100,000 or more.

A colt by Quality Road tied a Fasig-Tipton Midlantic record when sold for $1,500,000 during the opening session Monday.

That session saw across-the-board increases over both the 2019 and 2020 editions of the sale.

West Point Thoroughbreds/L.E.B., agent purchased the session-topping son of Quality Road for $1,500,000 from the consignment of Eddie Woods, agent.

Offered as Hip 211, the dark bay or brown colt is a half-brother to three winners out of the unraced Storm Cat mare Stormy Welcome, including multiple stakes placed winner Welcoming  by Tapit.

The colt's third dam is Broodmare of the Year Weekend Surprise  by Secretariat, who produced Horse of the Year A.P. Indy and G1 winner Summer Squall.

That colt worked an eighth in 10.0 during the Tuesday session of the under tack show.

The colt's sale price tied the record price paid for a colt at the Midlantic Two-Year-Olds in Training sale, set in 2017 when subsequent multiple stakes winner Curlin's Honor sold for $1,500,000.

"It was unbelievable," said Fasig-Tipton Midlantic Sales Director Paget Bennett. "The pavilion was full of folks and the infield was full of cars. The consignors were here with top horses and people recognized that and battled for them and it made for a great day."

The second highest price of the session was Hip 164, a colt by Malibu Moon purchased for $700,000 by Elliott and McElroy.

A New York-bred filly from the first crop of Eclipse Champion Classic Empire was the top-priced female of the session when sold for $550,000 to West Bloodstock, agent for Robert and Lawana Low.

A Florida-bred filly by three-time leading sire Tapit topped the Tuesday session when sold for $625,000 to Xtreme Racing Stables from the consignment of De Meric Sales, agent.

The session's highest priced colt was Hip 417, a colt from the first crop of multiple G1 winner Gormley, that sold for $490,000 to Spendthrift Farm from the consignment of Niall Brennan Stables, agent.

In all, 108 two-year-olds sold for at least six figures, representing more than 30 percent of those sold.