Larry Karp, who foals at Sylmar Farm in Christiana, wins Pa. and National Small Breeder of the Year

CHRISTIANA, Pa.--Larry Karp, who keeps all his mares at Betsy Houghton's Sylmar Farm in Christiana and foals them there, won the Thoroughbred Owner and Breeders Association’s State Breeder of the Year for Pennsylvania, and also the National Small Breeder of the Year. 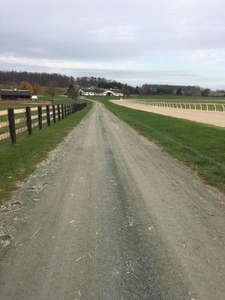 Sylmar Farm“I wasn’t surprised about getting it for Pennsylvania, because my mare Mirth and her foal took all the awards here,” said Karp, 77 of Plano, Texas. “I got five awards from the state this year. But to get it nationally really blew me away.”

"I've been training for Larry for about eight years," said Houghton. "Carl McEntee, who used to run Northview Stallion Station, is a good friend of mine. Larry's previous trainer retired, and he told Carl he was looking for a new trainer. Carl introduced me to him, and we've been together since."

"The first mare he sent me was Bound," said Houghton.

Bound won eight times, including three stakes, as second four times and third three times from 23 starts with earnings  of $419,174.

It was Karp's purchase of the mare Di's Delight for $55,000 in 2011 that eventually led to his collecting all the Breeder's awards.

"SO MUCH of what you do in this sport is fate,” Karp said. “I bought Di’s Delight nine years ago at Keeneland November, and she did okay. She threw runners, winners, whatever, but nothing special until Mirth.”

“I had a dilemma on who to breed Di’s Delight to one year," said Kar[. "Carl McEntee, who is my bloodstock guy, was the bloodstock manager at Darby Dan Farm in Kentucky. He told me his boss had a season to Colonel John, and why don’t we do a mare share? I put up the mare, he put up the stud, and then you sell the mare at Keeneland and split it.I thought that was a good idea, because Colonel John stood for $15,000 and I thought he fit well with my mare.”

Di’s Delight got pregnant, and Karp figured she would sell for the typically formulated two and a half times the stud fee.

“It was less than the stud fee, and I ended up with Mirth,” he said. “And if I hadn’t kept Di’s Delight, I wouldn’t have Vault. Talk about fate playing a part.”

"I won three races with Mirth," said Houghton. "We sold her after she won an allowance race at Laurel."

One month later, she gave her owners, Little Red Feather Racing, a thrill by leading the field in the G1 Breeders’ Cup Filly and Mare Turf before tiring to sixth.

Mirth is now in foal to Constitution, and will be offered for sale this fall.

I"It's just not that big of a deal,” Karp said. “I’m just a little guy with a couple of mares.”

While Mirth may have gotten away, Karp still has a percentage of Vault.

Houghton also trained Vault before Karp sold a percentage of her, winning five races with four seconds and one third from 13 starts.

The daughter of Pennsylvania legend Jump Start won the Thirty Eight Go Go Stakes at Laurel Park for Houghton last year, set a track record at Penn National, has two stakes-placings this year for her new connections and remains in training through the end of 2021.

Karp will foal five at Sylmar next spring, four that he bred to Maryland stallions and one, Guise, by Exchange Rate, in foal to Mendelssohn, that he just bought at the Keeneland sale in Kentucky.

“I wanted four, five at the most,” Karp said, who now has nine broodmares, five to foal at Sylmar and four in Maryland. “I’ve been trying to get the operation to the right size.”

“We’re getting to the end,” Karp said regarding Di’s Delight’s age. “She’s in foal to Midshipman, and I’m almost for sure going to have her foal in Pennsylvania. What happens after that is in Mother Nature’s hands.”

Karp also has homebred Imply, a Pennsylvania-bred who earned $772,728.

“She’s a special case, in that I could have sold her at Keeneland for a substantial amount of money, but I decided to breed her commercially and have the option of keeping her foals, or racing them," said Karp.”

.Although he keeps trying to pare down the operation, Karp purchased the Dansili (GB) mare Cycle (GB) from England and has bred her to dual G1-winner Brody’s Cause.

“I happened to own a life-time breeding right to Brody’s Cause,” he said. “He has been a surprising first-year stallion with four stakes horses and a G3 winner out of a small group.”

Brody’s Cause isn’t the only stallion Karp is invested in; he owns Maryland stallion Alliance, an unraced half-brother to champion Tepin.

Karp's four mares that are in foal to Alliace will foal in Maryland.

The ability to foal them at Sylmar in Pennsylvania is part of the appeal.

“I don’t have anything to look forward to anymore, what with Covid,” Karp said. “I haven’t left my house in six months. So, I was very grateful for the award from TOBA. I will continue to breed horses for the programs in Pennsylvania and Maryland, because they don’t have to be superstars and they still earn money. Over the years I’ve bred six or seven stakes winners myself, and not one of them was by a stallion that cost more than $10,000.”

Karp was gratified to see his team rewarded for their efforts.

“I’ve been with Carl for 10 or 12 years, and the guy that breaks my horses and gets them started is someone I’ve been with 35 years," said Karp. "I’ve only had three trainers over 36 years. It’s a small group of people who have supported me, and I’m grateful to every one of them.”

“I don’t know how I got to be the national guy; it’s just mind boggling," he said. "But it’s been fun, and I will continue with the program to the extent that I can.”