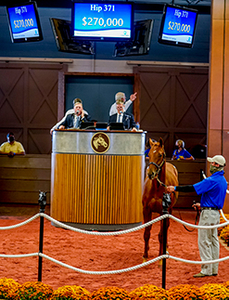 Gun Runner colt, hip 371, selling at the Fasig-Tipton Yearling sale at TimoniumThe Midlantic Fall Yearlings sale concluded  with figures on par with the 2019 renewal, with eight of the top 10 prices paid for yearlings bred in Pennsylvania, Maryland, and New York.

The chestnut colt was purchased by Lambe Bloodstock from the consignment of Becky Davis, agent.

Hip 371 is out of Stormy Tak, a daughter of multiple G1 winner and millionaire Lady Tak, making her a half-sister to Melody Lady, dam of this year's G1 Alfred G. Vanderbilt winner Volatile, and the colt was bred in Pennsylvania by Jon A Marshall.

The chestnut colt is a half-brother to three winners.

Lady Tak earned $1,160,782 while winning the Test and Ballerina, both Grade 1 sprints at Saratoga, and five other stakes.

The colt is one of three foals bred in Pennsylvania by Marshall out of Stormy Tak, the first her current 2-year-old filly by Point of Entry named Tak E Lady who is unplaced in two starts, and a colt by Cross Traffic foaled this past May.

The Gun Runner yearling went to the sale as Delaware certified, Virginia certified, Breeders’ Cup nominated and a registered Pennsylvania-bred.

A PAIR of Maryland-bred colts sold for more than $200,000 during the second session to account for the sale's second and third highest prices.

The first of these was Hip 451, a son of Flatter that sold for $250,000 to Bell Gable Stable from the consignment of Northview Stallion Station (David Wade), agent.

The dark bay or brown colt is out of Apple Cider, a More Than Ready daughter of G2 winner Who Did It and Run, and half-sister to stakes winners Giant Run and American Victory and was bred in Maryland by Sycamore Hall Thoroughbreds.

The third highest price of the sale was paid for Hip 383, a son of Street Sense that sold for $240,000 to West Bloodstock, agent for Repole & St. Elias Stables from the consignment of Chanceland Farm, agent.

The bay colt is out of the Polish Numbers mare Tanca, who has seven winners from as many to race, including stakes winners Cordmaker, Las Setas, and Corvus and was bred in Maryland by Robert T. Manfuso and Kathryn M. Voss.

The sale's top filly was a Md-bred daughter of Malibu Moon that sold for $140,000, and she was purchased by Charles J. Zacney from the consignment of Candyland, agent.

A total of 72 Pennsylvania-breds sold at the Midlantic sale for an average of $24,647.

Two others brought $135,000 each – a filly by Declaration of War out of the Unbridled’s Song mare Newstouse, and a colt by Kantharos out of Fleetheart, by Northern Afleet.

The Declaration of War filly is a half-sister to two-time stakes winner and 2019 PA-Bred champion 2-year-old colt Newstome.

Bred by Equivine Farm and consigned by Paramount Sales, the filly was purchased by BSW/Crow bloodstock agency.

Pennsylvania sires represented included Uncle Lino, the sire of 12 that sold for $308,000 (an average of $25,667) including a $75,000 PA-Bred half-brother to multiple graded stakes winner and PA-Bred champion Call Paul and multiple stakes winner Pink Caddy.

WynOak Farm’s Weigelia had eight sell for $135,500, led by a $52,000 full sister to stakes winners Fat Kat and Smooth B and stakes-placed Disco Rose and Pink Princess.

His top price was a $31,000 colt from the family of Kentucky Oaks-G1 winner Cathryn Sophia.