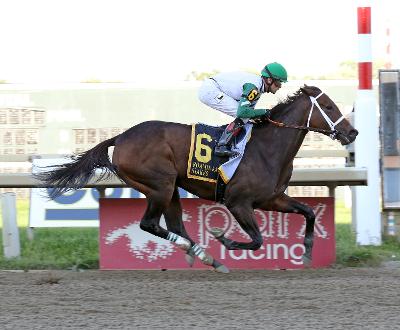 Chub Wagon winning at Parx (Photo by Equiphoto)The homebred filly, owned by Daniel J. Lopez and George Chestnut, is trained by Guadaloupe Preciado, but until a year ago she was trained by Lopez.

Lopez was a very successful trainer with an almost 50 percent rate of horses hitting the board, with 3,807 of his trainees placing first, second or third from 7,840 starters.

"I was training up until last year, but you can't find any good help at the racetracks anymore, so I gave the filly to Guadaloupe, who I've known for a long time," said Lopez.

Lopez got his start in the horse business riding jumpers in the 50s and 60s, and he did that very successfully, competing against others on Long Island, N.Y., like Neil Shapiro, who went on to be an Olympic veteran with silver and bronze medals from the 1972 Games in Munich, Germany.

"I just walked away from it," said Lopez when asked why he transitioned from riding to training racehorses.

"I STARTED with Willard Thompson," said Lopez. "My Father had racehorses with him. I was there for about six months and then went  out on my own. Yes, that was fast, but back then it was very different that it is now. You had to know a lot about horses to be a trainer. I had learned from all the horsemen on Long Island like Ralph Petersen and Davey Rintoul.

Chub Wagon's win at Parx was her fifth in a stakes race, and her only loss came in the Dr. Teresa Garofalo Memorial Stakes at Parx on Aug. 23 when she ran second to Don't Call Me Mary.

I"I don't train anymore, but I go to the track to watch all her workouts," said Lopez. "We'll give her one more race, but she's been going steady since November of 2020. I'm a big believer in turn-out. We'll turn her out and freshen her."

Lopez said that at  one point he had had a 100 acre farm, but he first sold 75 acres, keeping 25, but that he has since sold that, too and now no longer has his own farm.

H said he might get into training again if he could find good help.

BERNIE HOUGHTON had two winners at Penn National including one in an allowance race.

Tribal Notion showed speed between horses, was squeezed back entering the turn, swung wide into the stretch and went to the lead midstretch.

Octorara Orphie broke slowly, raced wide into the stretch and ran clear from the outside for the win.

Hard Rock Gold disputed the pace from the inside and dug in tenaciously to win by a head.