Buttonwod Farm, Hudson River Farms and Irv Naylor have horses that run in America and are trained in America by Jonathan Sheppard, and they are the only group of owners with horses shipped to Ireland this year to race there, but as National Steeplechasing pointed out, there are  other Americans who campaign horses bred and trained in Europe currently racing overseas. 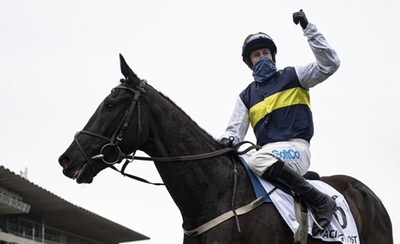 Franco De Port ridden by Bryan CooperWhile the eyes of the American steeplechase community are fixed on the exploits of trainer Jonathan Sheppard’s string over in Ireland, another leading US stable just scored a huge G1 win at the Leopardstown Christmas Festival in Dublin wrote Tod Marks..

PREVIOUS winners of the race include notable names such as Moscow Flyer, Douvan, Clarcam, Footpad, Min, and Notebook.

The Dec. 26 win was Cooper’s 36th career G1 and the first for the 5-year-old French-bred gelding, who improved his lifetime record to four victories in seven starts.

“We are thrilled with Franco de Port’s win on Saturday,” Hankin said, who watched the race from his Maryland home.

Shortly thereafter, Hankin received a congratulatory text from former jockey and current trainer Willie Dowling, who joked that he could hear Hankin screaming with excitement from two miles away as his horse ran down the leaders.

As for the horse’s future, Hankin said, it’ll be up to trainer Mullins to decide when and where he runs next.

Speaking of G1 glory with American connections, congratulations are also in order for Frodon and Bryony Frost.

The pair teamed up to take the prestigious King George VI Chase at Kempton Park outside of London for trainer Paul Nicholls, on Dec. 26.

The win in the race was not only the first by a female rider, but it gave Frost her 175th career victory, making her the most successful female National Hunt jockey of all-time.

Frost and Frodon previously made history at the 2019 Cheltenham Festival, winning the G1 Ryanair Chase.

After her milestone win, Bryony spoke with reporters, where she said, “I talked to my brother, who is currently in the U.S., last night, and he said, ‘how cool would it be if you broke the record on Frodon in the King George?’ ”

What you may not know is that Bryony’s brother is none other than Hadden Frost, a leading timber rider on the NSA circuit.