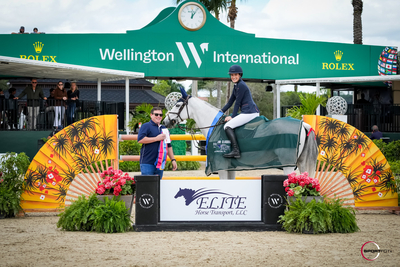 Jessica Springsteen (Photo by Sportfot)“I’ve had this mare since she was 6 years old, and she’s 9 now," said Springsteen. "I think she is really special. She has taken a little bit more time but is super careful and is very competitive. I’m hoping to step her up and put her in a couple of the smaller Grand Prix classes this season.”

The speed class had 37 competitors, with 18 of those going clean.

Twenty-sixth in the order of go, Springsteen on Naomi Van Het Keizershof stopped the clock at 62.69 seconds to edge the early leaders, Jad Dana and Fleur-De-Lis’ Cherie, out of the lead and to be ultimately the winning time.

“It was a very fast class,” said Springsteen. “The first few were all fast, so I knew that we had to go a little bit more forward today. Naomi Van Het Keizershof jumped well on Thursday, so I knew I could really rely on her. A lot of people were leaving out a stride in the first line, and I thought about it for a second but then changed my mind. I ended up doing an eight and was able to make up for the time in other places.”

Just off the pace, Dana on Fleur-De-Lis’ Cherie placed second in a time of 63.19, and Michael Hughes on Calisto Blue was third with a clear time of 64.3 seconds.

She was awarded a base score of 84 plus four additional points for taking the high-option fences for a score of 88 in the classic round and then a handy round score of 68 for the win.

Samantha Senft of Wellington on La Roux 11 was second with a cumulative score of 155 points, with Demsi Cason of Jupiter, Fla., on Kalani placing third with 148 points.