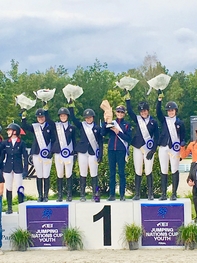 The Finals began Friday with nine teams competing in the first, qualifying round, with only the top six qualiying for Sunday's Final.

The Saturday Challenge Cup was for those teams that didn't qualify for the finals.

France won the silver medal and The Netherlands earned bronze.

“This was a great experience for the girls." said Kursinski. "There may have been some first time nerves. After having yesterday under their belts, everyone rode amazing and like they are capable of. Other teams were impressed that we had four clear rounds. Of course, we were disappointed that we didn’t get in tomorrow’s final round, but today we got everybody’s attention.”

Kursinski tapped Cohen of New York, N.Y., on Billy Fanta, Farish of Versailles, Ky., riding Great White, Goetzmann of Skaneateles, N.Y.,, on Prestigious, and Langmeier of East Granby, Conn., with the opportunity to advance them to Sunday’s final competition.

Although the team put forth great effort, Farish and Great White were the only combination to jump clear on Friday.

The U.S. team placed eighth with 12 faults, just missing the chance to qualify for Sunday’s Final by four faults.

With only six teams allowed to advance to Sunday’s Final, the U.S. advanced to Saturday’s ‘Challenge Cup’.

“This event is an extremely important part of our development program," said Kursinski. "There’s no substitute for this kind of experience. They can read all the books and watch all the videos, but to have their own personal experience is invaluable."

"Everyone has learned a tremendous amount just being here,” said Kursinski. “Even our fifth rider, Ailish Cunniffe, she had a wonderful week, winning on Friday and placing second on Saturday in individual competition. I hope more riders and trainers really try to embrace it and work to qualify because it is such a unique, lifetime experience. It is imperative for their development and future team experience.”