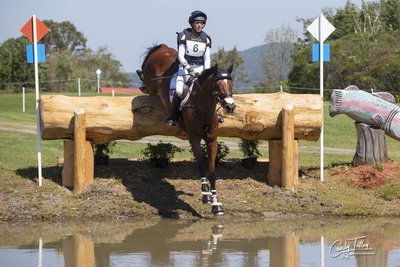 The team of Liz Halliday-Sharp, Lillian Heard, Andrew McConnon and Colleen Rutledge, under the direction of Chef d’Equipe Leslie Law, finished with a total score of 138.6,ahead of the silver medal-winning home team from Canada, which scored 158.3.

Australia finished in third on a total score of 2050.3 after two of their team members withdrew.

“I was very pleased with our team’s performance,” said Law. “It was mainly a developing team of both horses and riders, and they put up a strong performance in all three phases to win very convincingly. I thought there was very good team spirit amongst everyone, and it was a promising result as far as developing pairs for our future, which is what my program is all about. I’m very pleased both for our riders and our program.”

HALLIDAY-SHARP of Lexington, Ky., on Miks Master C was the wire-to-wire leader in the CCI4*-S, adding only 8.4 time penalties on cross-country to her dressage score, finishing with a 37.6 to lead the U.S. team to gold and to win the gold medal individually. 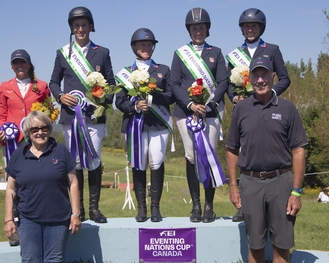 U.S gold medal Eventing team (Photo by Cealy Tetley)“He’s an incredible horse,” said Halliday-Sharp. “I’ve only been with him three months now, so we’re still getting to know each other, but I really think he’s completely world-class. He’s very special. He’s very brave. He’s powerful. He moves beautifully. He kind of is the whole thing. It’s just been a matter of putting our partnership together and getting to know him.”

The pair recently won the CCI4*-S at The Event at Rebecca Farm in July.

“He’s changing all the time because he’s getting stronger, and every event I’m taking to, he’s different,” she said. “It’s been a learning process and I very much looked at Bromont as a steppingstone to the future with him. He was quite strong at Rebecca Farm, so I’ve been sorting out my controls and just jelling with him and really getting to know him better. I was really happy with the rounds that I had, both in show jumping and cross-country. I felt like we were really together. A lot of the areas that he needed tidying up on were there this time. It was a strong enough track that I believe I’m in a place now with him that I’m hopefully going to be able to go to Boekelo with him and a five-star in the spring.”

First to go for the U.S. team was  Lillian Heard of Cochranville, Pa., on, Dassett Olympus, and she also had no jumping faults, adding only time faults of 15.2  to her dressage score to finish in fourth place overall with a 49.4 behind Canadian Colwwn Loach who finished second abd thrid on Vermont and FE Golden Eye..

Making his Nations Cup debut, Andrew McConnon of Southern Pines, N.C., rode Ferrie’s Cello, moving up from 18th place after dressage to finish in seventh with only cross-country time faults added to his score.

Colleen Rutledge of Frederick, Md., on Covert Rights had a runout on cross-country, but was able to finish and add a Nations Cup completion to her long list of accomplishments.

The Bromont CCIO4*-S is the only FEI Eventing Nations Cup to be held outside of Europe for the 2022 season, and it provided an invaluable experience for U.S. riders looking toward championships competition.

“I’ve competed on multiple Nations Cup teams over in Europe, but it’s awesome to have one over here,” said Halliday-Sharp. “I think it was a very true track as well. Derek di Grazia built a strong four-star that was a tough track and took some riding. I think that’s another opportunity—when you see it as a Nations Cup, you can build up quite a challenging four-star, and we need more of that in this country. We need to make sure we’re all being challenged. It also gives everybody a chance to compete in a team environment without having to go to Europe, so that’s a great opportunity for all of us, really, and for the up-and-coming riders.”