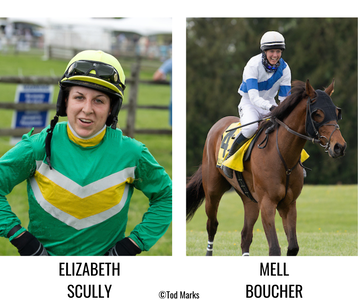 Jockey Elizabeth Scully, who had a good fall season in 2021 and a very productive spring season, was nominated to represent ARCA in the Ladies World Championship Series.

This series is governed and sponsored by Fegentri, an international racing organization with 26 member countries.

Elizabeth had a late start due to some conflicts and an injury but made her first trip to Zurich, Switzerland, to ride at the Dielsdorf Racecourse on Aug. 21.

She drew a pretty nice ride with a horse named Carya (riders are drawn by lot) and finished fourth traveling 2300 m (about 1 mile 3/8).

The following weekend in Belgium, at the Oostende Racecourse, Elizabeth rode Xarco in a 1600 m (1 mile) race where she again finished fourth.

These races are very competitive and the ladies representing their countries ride like they are possessed by the devil to win.

Two good starts for Elizabeth, a handful of points earned and some real experience and fun.

THERE IS more on the calendar for Elizabeth.

On Sept. 15, she will try her luck in two races, both handicaps, one long on the turf and the other a sprint on the dirt in Oslo, Norway at the Ovrevoll Racecourse.

On Sept. 10, Mell Boucher took the reins at Magdeburg, Germany.

Other news in case you missed it - Laurel Park hosted an ARCA race on Sunday, Aug. 7.

This race was a Maiden Claiming race, claiming price $30,000.

There is an upcoming race for ARCA on Sunday, Sept. 18, at Pimlico.

A Maiden Claiming race will be drawn going 1 mile 1/16 on the turf.