GLYNDON, Md.--Vintage Vinnie (Ire)d, ridden this year by 18-year-old Teddy Davies, romped away with the Maryland Hunt Cup for the second year in a row, and for the second year in a row set a new track record of 8:15 while winning ,according to official records, by 62 lengths, although in fact he was crossing the finish line while the horse closest to him was still two fences from home, which seemed more than 62 lengths.

Although it now costs, the live stream was horrendous, but here is the video of the race with both announcing and shots of Vintage Vinnie. 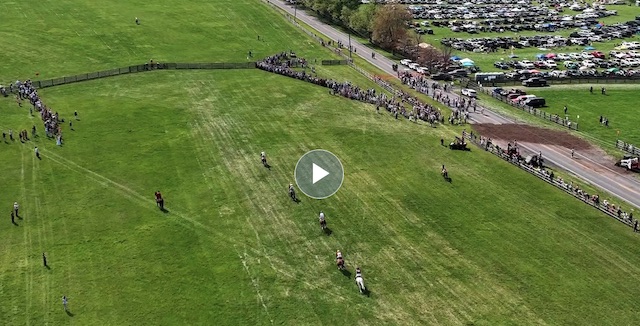 Armata Stable's 13-year-old gelding led a times by well over 100 lengths, at one point about to jump the huge 13th while the rest of the field was jumping the 12th. 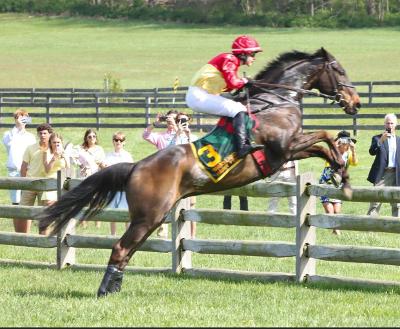 "Teddy's been riding Vinnie all winter," said his father Joe, who trains the gelding. "Dan could only come over for a weekend, so the plan was for Teddy to ride him in the Manor and than have Dan ride him in the Hunt Cup. But then Dan had a fall two weeks ago and had a concussion and couldn't come.

"I've had trouble getting someone to ride him. Chris Gracie rode him in the Manor two years ago and said he'd never again ride a horse that ran into his fences that fast. I said to Teddy, `Do you want to ride him?' Teddy said, `Do you think he'll win?' I said, `Yes, but it won't be a gentle ride.'

"My only instructions were to sit up and keep a leg on him and try to get him to relax.

"One problem with him is getting him to the start because he bolts. Ashton Williams, our assistant trainer for six years, led him to the post and completely charmed him. He was the quietest horse at the start. Then Teddy just popped ahead at the start.

Teddy was on the winner's stand as a 1-year-old the last time I won the Hunt Cup, riding Make Me a Champ, and then he was on it as a 7-year-old when his mom, Blythe, won it in 2011on Private Attack," said Joe. "Now he's taken over the reins." 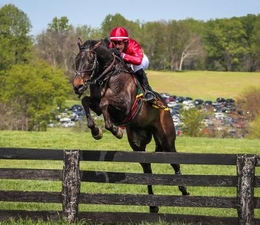 "He's lovely to ride," said Teddy. "He gets really nervous, so I was just working on keeping him calm and in the race on keeping him happy. Once he gets going, he has such a high cruising speed.He jumped brilliantly."

"I was definitely excited about riding in the Hunt Cup," said Teddy. "I don't usually get too nervous, but I did have a few butterflies.But when the race begins it turns to adrenaline. That's what I love about racing."

"I thought he went brilliantly the whole time," he said. "When we got to the 12th fence, I asked myself if we could keep going that fast. But he trains so hard at home, he just has that stamina."

"In the summer, Vinnie spends two weeks at a spa swimming with an under water treadmill," said Joe. "Then he's a home jogging. So it's about half and half swimming and jogging. We never let him down. He won't run again until next spring. Then he'll tell us if he wants to run in the Hunt Cup again."

Lucy Goelet's Rocket Star Red, trained by Mark Beecher and ridden by Brett Owings, broke away from the rest of the field at the 20th fence and went on to finish second, 35 lengths in front of third placed Goodoldtimes (Ire),trained by Alicia Murphy and ridden by Colin Smith. 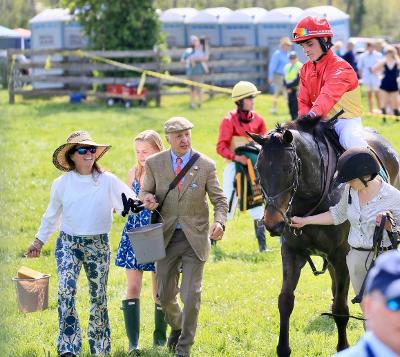 Vintage Vinnie with, left to right, Blythe and Joe DaviesLe Chevalier, trained by Julie Gomena and ridden by McLane Hendriks, moved up to challenge Rocket Star Red at the 17th, but then dropped back to finish a distanced fourth,, with Blackhall (Ire), trained by Davies and ridden by Eric Poretz, an even further distanced fifth.

Pocket Talk, trained by Davies and ridden by William Easterby, bobbled badly at the third but stood up and then fell at the 12th while running second.

Both Preseli Rock, trained by Jack Fisher and ridden by Connor Hankin, and Sideling Hill, trained by Willy Dowling and ridden by George Daly, fell at the 16th fence, the biggest fence, at 4'10", on the four mile course.

Harper McVeigh of the National Steeplechase Association said they were in talks with the video company to see what had gone wrong with the live stream.

The pictures on the live stream were usually so far away that even if you knew the colors yo couldn't pick them out.