MIDDLEBURG, Va.--Keri Brion won four races at the Middleburg Spring Races on April 23, including the G2 Temple Gwathmey Hurdle Stakes with Iranistan, a horse she had nursed back to racing fit after a serious injury. 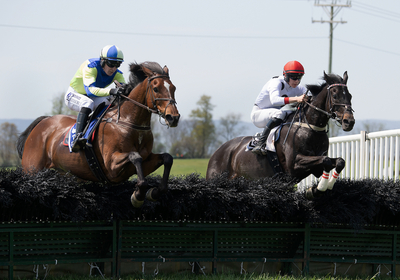 Iranistan, right, and Snap Decision battle over last in the Temple Gwathmey (Photo by Tod Marks)Brion saddled the winners of three of the five hurdle races and also had a second, a third and a fourth to move into the lead in Trainer, Money Won while still standing second to Leslie Young, who also had a winner at Middleburg, in Trainer, Races Won.

Parker Hendriks, 19, rode three winners and two seconds to move into a commanding lead in both Rider, Races Won and Money Won.

Hudson River Farms' Iranistan, ridden by Hendriks, won by 2 1/4 lengths over Snap Decision, trained by Jack Fisher, after leading for most of the G2, 2 1/2 mile $75,000 Temple Gwathmey.

When the flag dropped, the field of five stakes winners stood stock still for 25 full seconds, with none of the jockeys willing to go into the lead and set the pace.

Finally Hendriks took off and stole about a five length lead which he held over Moscato, also trained by Fisher, with Snap Decision making his way from fourth early on to head Iranistan at the 11th of 14 fences.

IRANISTAN moved back into the lead by about a length until again joined by Snap Decision heading to the 14th and final fence.

The race favorite, Snap Decision is a beautifully bred son of Hard Spun and a winner on the flat, who had won nine straight hurdle races before being beaten by The Mean Queen, trained by Brion, in two classic stakes duels last year.

Everyone, including Brion, thought he was going to easily go past Iranistan, but Iranistan dug down and pulled away in the stretch to win by 2 1/4 lengths.

"What a special win this was for all of us," said Brion, who had been assistant trainer to Hall of Fame trainer Jonathan Sheppard prior to his retirement.

She said that Ed Swyer, owner of Hudson River Farms, had stood by her when she began training and had been very patient with Iranistan while he was being brought back after an injury suffered in his second handicap race win at Saratoga in 2020.

"He had a tendon type injury in his pastern," said Brion. "It has been a huge effort by so many people to get this horse back to the form he showed early in his career, but especially Dr. Taryn Gassert who has worked so hard with me to do everything right by him in his rehab process and getting back to the races.

"We brought him back slowly and with the goal of the Noel Lang at Montpelier last fall in mind- which he won. This spring he went in the Camden training flat race to prep for the Temple Gwathmey- which is the only big hurdle race Ed Swyer hasn’t won. Well he has now!

"Iranistan was all heart today and he wasn’t letting anyone past him. Parker gave him a great ride. The morning of the race, his groom, Angel, told me that today Iranistan would beat Snap Decision. I laughed, but Angel clearly knows what’s up," said Brion.

"We knew he'd run big," she said. "He's better than ever. I rode him every day when he was a young horse, but I never thought he'd beat Snap Decision.

"I told Parker, if Snap Decision goes by you three fences from home, let him go. If he comes at you at the last, try, but don't kill him. When I saw Snap Decision jump with him over the last, I thought, well good, we'll be second.

"I hope Jonathan knows he won. This horse was one of Jonathan's favorites. He really loved this horse," said Brion.

"We weren't really trying with Snap Decision," said Fisher. "He was giving away 14 pounds, and trying to hard with that weight is the way you get horses hurt. Our goal is the Iroquois."

Snap Decision is aiming for the Iroquois Stakes, where The Mean Queen is also headed.

"I bought him from Tom Mellon, a blood stock agent," said Brion. "He was stakes placed in France. He's going to run over fences, but he'll run in the flat stakes at the Gold Cup."

Brion then won the $30,000, 2 1/8 mile Allowance Hurdle with The International Venture's Going Country (Ire), ridden by Mikey Hamill, who won by 1 length over Scorpion's Revenge, trained by Murphy.

"We were going to give him a hack out of the back," said Brion. "The plan was to give him an easy run looking twards his next race. That's why Parker took another ride in the race. The owners were laughing, they said `You even win when you're not trying."

Brion then saddled Metahorse Racing's Kicking Myself (Ire), ridden by Hendriks, to win the $20,000 Filly and Mare Maiden Hurdle by 4 lengths over Lear Avia, trained by Todd Wyatt.

"She's really nice," said Brion. "I bought her last winter while I was in Ireland. She's by the same sire as The Mean Queen."

Storm Team looked a bit off coming back to the winner's circle, and, while Fisher said he hadn't been lame, in interviews with other trainers, they said that was normal for Storm Team, that he always looked off after a race but that he cooled out fine, and  he was sound going back to the barn.

Craig Braddock announced the races and did a superb job, often giving additional information about the horses and/or their riders as races were being run.