SARATOGA SPRINGS, N.Y.--Leslie Young won her second steeplechase race at Saratoga when she saddled the winner of the $65,000, 2 1/16 mile Allowance Steeplechase on Aug. 4. 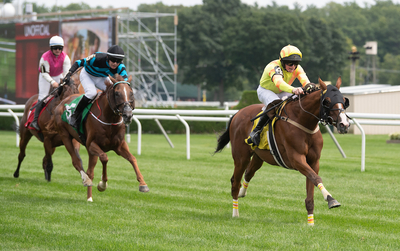 Ballybristol Farm LLC's Silver Crescent, ridden by Gerard Galligan, won by 2 1/4 lengths over Keri's Find, owned and trained by Keri Brion and ridden by Parker Hendriks, with Perfect Tapatino, trained by Young and ridden by Tom Garner, finishing just a neck back in third.

Lemonade Thursday, trained by Jack Fisher, was pulled up on the backside on the first circuit but walked off, and Withoutdestination, trained by Todd Wyatt, was eliminated when he passed on the wrong side of a beacon while challenging in the stretch.

About the same thing had happened to The Mean Queen, trained by Brion, in the Jonathan Kiser Novice Stakes on July 28, when she was bearing left in the stretch, saw the beacon and jumped right, losing her rider and giving Young her first win at Saratoga this year with Bodes Well.

"I BOUGHT Silver Crescent at a Tattersall Sale after he had won a maiden race on the flat," said Young. "He was second in a steeplechase at Colonial Downs in 2019, then he bowed a tendon in a race at Foxfield. We  brought him back this year, and he won a maiden special weight at Tryon before coming here."

"He;s a lovely horse and an easy ride," said Young. "He's beautifully bred by Champs Elysees and a full brother to a winner trained by Willy Mullins."

"He pulled up nicely," said Young. "Probably now there's nothing else for him up here, because it looks like the novice race isn't going to fill. So I don't know where he'll go next."