ELMONT, N.Y.--Mean Mary broke sharply and went straight to the front, controlling the pace and just holding on to win the $750,000, G2. 1 1/4 mile New York Stakes for fillies and mares 4 and up on the inner turf course by a nose over Thundering Night. 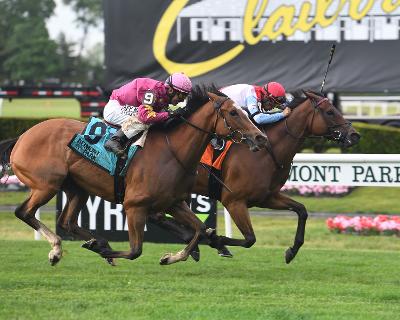 Mean Mary winning the New York Stakes (Photo by Coglianese Photography)Owned by Alex G. Campbell,, trained by Graham Motion and ridden by Luis Saez, Mean Mary won the New York takes for the second year in a row and ran her earnings to over $1 million.

This was Mean Mary's second start and second win this year, having won the G3 Gallorette Stakes at Pimlico on May 15,

“I was really anxious when I saw Thundering Nights closing so fast, but I had felt pretty confident to that point,” Motion said. “She was really running. She came out of the gate like a rabbit. I’d never seen her break like that. She really does love it. She’s such a cool filly.”

Saez, aboard for all of her stakes wins, said Mean Mary handled the course with aplomb.

“She just broke well and she loves to run free,” Saez said. “I was just so glad to be on her. She got a great trip, broke out of there so well. She always breaks pretty well, but today was better than ever. She controlled the pace. The track was a little soft, but she handled it. She tried pretty hard the whole time.

“JOHNNY (Velazquez on Thundering Night) came flying there, but she gave me that last kick,” Saez added. “She’s a hard fighter."

A group stakes winner in Europe, this was Thundering Nights' first U.S. race.

Mean Mary was second in the Diana Stakes last year, beaten a neck by Rushing Fall.

Mean Mary now has started 11 times with seven wins, five of them in stakes, and two seconds with earnings of $1,006,160.