WEXFORD, Ireland--Keri Brion finished her stint of training in Ireland by saddling her second winner, Buttonwood Farms LLC's The Mean Queen, ridden by John O'Neill, who won the $12,000 Mares Maiden Hurdle at Wexford on April 9.

It was an historic win for Brion, as she is the first American trainer training in Ireland to saddle a horse to win over fences. 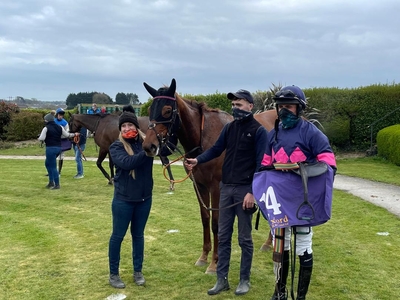 Let to right, Keri Brion, The Mean Queen and far right, John O'Neill, after winning at WexfordRunning in the middle of the pack on the first circuit of the 2 1/2 mile race, The Mean Queen moved up gradually to be third going into the final circuit. going to the lead 3 furlongs from the wire and going on to win comfortable by about 6 lengths.

"I expected her to do well," said Brion. "She jumped beautifully. She was second at Down Royal in the Bumper race there, and the mare that beat her went on to win a race at Aintree. The Mean Queen had really bad racing luck to get beaten there."

A Bumper race is for steeplechase or hurdle horses running for the first time on the flat..

"The Mean Queen is really special," said Brion. "The Moorheads actually bought her last fall, and she won a  point-to-point in their colors being trained by James Doyle. She then had some time off and came to me in January."

BRION, WHO had originally been scheduled to fly home Saturday, said that she changed her reservation to Sunday in anticipation of The Mean Queen's winning so that she could stay to celebrate.

The horses are also shipping out on Sunday but they go first to Belgium and then to New York where they will be in quarantine until April 16 or 17.

"When the nine horses from Ireland get here, I'll have filled my 20 stalls at Fair Hill, so I'll have to get more stalls there, because I'm getting to get a few flat horses in in the next few weeks." said Brion. "We got a couple of maidens in Ireland to come home along with the ones I've been training over here."

"The Naylor's Scorpian's Revenge is going to Cyril Murphy when we get back home," said Brion. who's first win in Ireland was with Scorpian's Revenge. "That was always the plan. I just had him in training while he was here."

"Baltimore Bucko and The Mean Queen will  go to Nashville for the Iroquois, and Winston C is aimed for Saratoga." said Brion. "Sportswear is going to the Queen's Cup, the first steeplechase race at home."

"We had two winners, and we had horses that hit the board a lot of times over here," said Brion. "I think it's been a very successful trip. It's very tough and competitive racing over here."