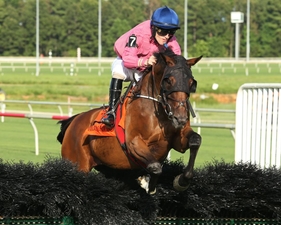 Kensington Court (Photo by Coady Photography)"It was a nice drive home in the dark," said Gomena, who lives on her Over Creek Farm in Middleburg, Va.

Colonial Downs races begin at 5 p.m., and the steeplechase races are the first and third on the card, so by the time Kensington Court, who won the third race, was cooled out, it was already night time.

Kensington Court, ridden by Kieran Norris, won by a nose over Liepers Fork Steeplechasers' Querry Horse (Fr), trained by Leslie Young and ridden by Gavin Sheehan, with Robert A. Kinsley's Al (GB), trained by Elizabeth Voss and ridden by Jack Doyle, another 2 lengths back in third.

"I got Kensington Court as a 3-year-old, and he's 7 now," said Gomena. "I claimed him from Todd Pletcher at Monmouth.

"JUST SIX weeks later, while he was still a colt, he was second in the 3-year-old Novice race at Far Hill. He's such a good guy. He's a natural jumper.

"He was my first ever winner at Saratoga as a 5-year-old, in a non-winners of two race. But he got a suspensory, so I had to give him some time off. Then he did a tendon, so he got more time off.

"I used a new rider on him this time," said Gomena. "I used Kieran Norris, and I told him go out as fast as you can, even if it scares you. So he went out fast, and he was 15 lengths ahead at 2 miles."

Gomena's strategy worked, and Kensington Court held on to win by a nose from a field of eight.

Gomena grew up in Oregon, and her career began as as Eventing rider.

She moved East to train with Bruce Davidson in Unionville, Pa., and in 1994 she rose to the top of the Eventing world by winning the 4* Rolex Kentucky Three-Day Event on Treaty.

She then transitioned into steeplechasing, first as an amateur jockey and then as a trainer, winning her first race as such in 1994. 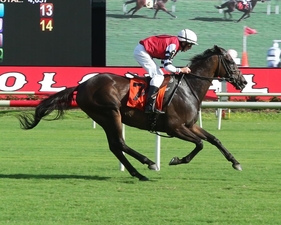 Jump Ship (Photo by Coady Photography)Lillith Boucher saddled Why Not Racing's Jump Ship, ridden by her husband Richard, to win the first race on the card, the $30,000, 1 1/4 mile Maiden Special Weight.

Jump Ship rated back last in the six horse field, moved up in the last time down the backstretch, angled out into the three path on the turn and battled with Anticipating through the stretch until driving clear to win by 2 1/4 lengths.