Hall of Fame trainer and breeder Ray Francis died May 23

HARWOOD, Md.--Ray Francis, 96, a renowned hunter and equitation trainer, breeder, judge and steward who is in the National Horse Show Hall of Fame and was awarded the USHJA Lifetime Achievement Award in 2016, died May 23 at home with his wife Cheryle. 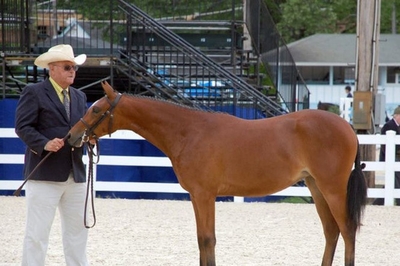 Ray Francis at Devon in the Breeding divisionFrancis burst upon the scene in the states in the 60s with a stable of top equitation and junior riders.

Two of his top riders were Pam Carmichael and Drew Davenport, who was deaf.

Francis learned how to sign so that he could interpret equitation judges' orders to Davenport, which captured the attention of exhibitors and spectators at shows like Piping Rock on Long Island.

"She was one of the most beautiful riders I've ever seen," said Francis.

Carmichael had two top horses, and just at the time when junior hunters were divided into small ad large,, she had one small and one large that countless times were champion in both sections at all the top shows and twice won Horse of the Year honors.

Carmichael passed on her talent, as her daughter Lillie Keenan is now on the short list of riders for the jumping team at the Tokyo Olympics.

"You could not go in the ring unless every hair was in place," said Jeanne Sharpe, formerly of Pennsylvania who now lives in Elbert, Colo., but who rode with Francis as an amateur-owner while he was training in Ohio.

"You had to have polished boots, and we had to clean the tack between classes and polish the bits until they were spotless," said Sharpe. "We had to call hm Mr. Francis."

Francis, along with Junie Culp, was one of the first trainers who insisted upon spit and polish, and he helped to upgrade the standard of excellence in this country,

FRANCIS was born in England, and when his father died suddenly when Francis was only 7, he began working at the family farm, leaving school at 14, the legal age then in Britain, to run the farm.

When he was given the Lifetime Achievement Award, Francis and his wife Cheryle did an interview that is still on YouTube.

"We had nice horses and a good business," said Francis, who showed, rode steeplechase races and played polo as a youngster until, in his 30s, he decided to move to the States.

"I answered an ad in Horse and Hound and went to work for Nancy Hannum in Unionville," said Francis.

Deciding that wasn't for him, Francis then moved to Ohio to train Cyrus Eaton's grandchildren, where he quickly upgraded the horses and soon had customers flocking to him for training.

He moved to Florida, at first stabling with Lynn Firestone, and during his years there met Cheryle, and they married.

"I had grown up in Pennsylvania," said Cheryl, and eventually they moved there, soon finding a property to buy in Doylestown.

"There was a big, old house," said Cheryle. "Ray designed and built the barn. He and his friends put up all the fencing."

Francis named his farm Offington Stables, named after his family's farm in England.

"I had a number of hunters that I rode," said Francis. "I was no Rodney Jenkins, but I won my share."

"Then we got a couple of customers that were interested in hunter breeding," said Cheryle. "That snowballed, and we got more."

"It got so that I didn't want to do show horses any more," said Francis. "The beauty of the baby horses was that exhibitors didn't ride them. They only saw them at shows."

Francis had the Best Pa-bred at Devon eight times and was Leading Pa-bred Handler a number of times.

"Ray thought Devon was one of the best shows," said Peter Doubleday, co-manager of Devon. "I first met him when I was young, and he was judging the New York State Fair. My parents had him over for dinner, and I was fascinated by his accent."

"He was a legend in all phases of the business, but he was the greatest in hunter breeding," said Doubleday.

Francis acquire a stallion named Grand Prospect, from whom he had a number of foals, including the outstanding Spanish Spear and Anastasia, both Best Young Horse at Devon.

Along with his prowess as a trainer,, rider and handler, Francis judged every major horse show in the country and stewarded a number of shows.

He began to suffer health problems in 2016, and Cheryle, who serves a secretary at a number of top shows, including Devon, has taken superb care of him at home, while they eventually moved from Pennsylvania to Maryland.

He was a member of the Professional Horseman's Association and was on the USEF Breeding Committee.

Cheryle said Ray didn't want a funeral but hopes to have a celebration of his life at a future horse show where his many friends would be in attendance.