DEVON, Pa.--Five days after Devon Horse Show and Country Fair officers begged the U.S. Equestrian Federation to follow Pennsylvania's guidelines on spectator capacity, the USEF announced on April 14 that as of May 3 horse shows would be allowed a maximum of 40 percent of the ticketed spectator capacity for competitions that operate with a ticketed gate. 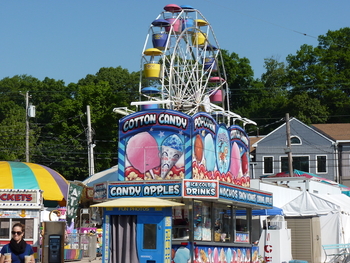 Devon Ferris wheel in the FairBut with the decision already having been announced and everything cancelled, it is too late now to turn around and hold the show this year.

"I wish that USEF had been more forthcoming even two weeks ago," said Devon Chairman and CEO Wayne Grafton. "We need to have a capacity of over 50 percent to be able to hold the show. It's been an emotional roller coaster. If USEF had said it would follow state guidelines, we would have been all over the state to raise the percentage."

But, according to McLain Ward, a two-time Olympic gold medalist and one of the founders of the North American Riders Group,an association that worked to raise horse shows' standards, it wasn't entirely the fault of the USEF.

"I BELIEVE that the USEF made every effort to do everything Devon wanted," said Ward, who said that through numerous phone calls that he had talked to many of he people involved in the decisions made. "I know for a fact that in just four days after Devon announced its decision to cancel the show that people interested in seeing the show go forward raised over $800,000. They raised enough money to cover any losses from the show or the fair."

When earlier this year Kentucky 3-Day Event announced it would cancel this year's Event, concerned eventers raised enough money to convince Kentucky to hold the event, albeit without spectators.

Earlier, Grafton had said that he was aware of the fund raising efforts for Devon, but that he had heard that Kentucky had had to refund at least some of the money raised and that Devon was unwilling to take such a chance.

Grafton said that both Boards, the horse show and the fair, had voted unanimously to cancel the show on April 7 after the USEF announced on April 6 that it would not announce spectator protocol until May 15.

He said that Devon had held off making the announcement until Saturday, April 10, asking again the USEF to change its protocol and to work with Devon, giving the USEF until Saturday to contact him but that he hadn't heard from them.

Once the show had been cancelled, it would have been extremely difficult if not impossible to rescind the decision.

All the show officials, judges, steward announcers, etc., had been notified of the cancellation, hotel rooms had been cancelled, feed and bedding orders were cancelled.

A huge 11 day show with an accompanying fair with multiple shops and a large number of fair rides is an unwieldy organization that takes a huge amount of time to organize.

But as Ward pointed out, while he can show all over the world and can expect to show many more years at Devon, there are many children for whom Devon is the pinnacle of their showing career, and by missing two years of Devon many of those children would never get the experience of showing "Where Champions Meet."

It is a shame not only for exhibitors but also for spectators from surrounding counties and nearby states for whom Devon is a much anticipated event that there will again be no Devon Horse Show and Country Fair, for the second year in a row.

It was a similar event that affected the second of Chester County's two major events, Plantation Field Eventing, last fall in which USEF again changed its protocol too late.

Last year, the USEF misguidedly went along with U.S. Eventing Association's decision to refuse to use the word Plantation in reporting on events there and would refer to it a P. Field.

That brouhaha was caused by the editor of a blog, Eventing World.

Although plantation means a place where trees are grown, Eventing World said the word injured blacks as it refers to places where slaves were kept pre-Civil War.

Eventually, USEF agreed to use the full name in articles about events held there, but not before it had caused a huge amount of damage.

Due to a contract signed before the brouhaha, Plantation Field continues to hold events on the property and continues to use the full name.