FAIRFIELD, Conn.--Robert “Bob” Cacchione founded the Intercollegiate Horse Shows Association (IHSA)  in 1967,and in the past 30 decades that association has proved thousands of college students, many of whom could not have afforded those opportunities, with an education and equitation skills. 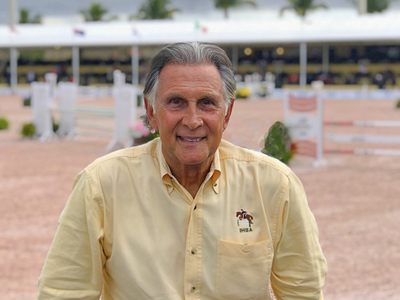 “I am honored to be recognized by the MET,” Cacchione said. “But I am more thrilled with the work Jane DaCosta and MET have done to provide opportunities for kids across the country to learn horsemanship and sportsmanship.”

Cacchione and DaCosta believe that all youth should have access to the personal growth provided by the equestrian community.

CACCHIONE'S vision has touched the lives of thousands of college athletes by providing the opportunity to compete in a team environment while furthering their education and advancing their skills in the equestrian sport.

“Seeing how the goals of the MET align with all that Bob accomplished within the IHSA, we are privileged to honor him at our 10th Anniversary Gala,” said MET Founder and Executive Director Jane DaCosta. “We love witnessing riders move on from our program to becoming part of an intercollegiate equestrian team.”

Cacchione founded the IHSA in 1967 and was the catalyst of the organization’s growth to more than 10,000 members in the United States and Canada before retiring as executive director in September, 2019.

Cacchione was recently an IHSA Hall of Fame inaugural inductee and was the recipient of the William J. Moroney Visionary Award at the Evening of Equestrians during the 2019 United States Hunter Jumper Association Annual Meeting held in December in Denver, Colo.

The MET 10th Anniversary Gala will commemorate the impressive accomplishments of the organization and its alumni, who many have gone on to become members of the IHSA, over the last decade.

For more information or tickets to the event, visit MetropolitanEquestrianTeam.org.

The Intercollegiate Horse Shows Association welcomes men and women of all riding levels and offers individual and team competition in hunter seat equitation, Western horsemanship and reining at more than 400 member colleges and universities.

Membership in IHSA means that college students can participate in horse shows regardless of their experience or financial status.

Students compete at eight levels from beginner through advanced with suitable, provided horses, eliminating the expense of horse ownership.

Founded in 1967 by Bob Cacchione, it is the oldest and largest intercollegiate equestrian organization with 10,000 members in 47 states and Canada.

IHSA college and university team participation is represented through a variety of programs including varsity athletics, academic departments and club sports.

Many IHSA teams participate in service projects, giving back to their communities.

Through the IHSA, students enhance their college experience and develop the tools that help build successful careers.

Established in 2010 by Jane DaCosta, Metropolitan Equestrian Team provides access to equestrian sports to children of all backgrounds in grades 3-12.

Through learning horsemanship, sportsmanship and agricultural skills, MET aims to raise the next generation of leaders.

MET supports the academic achievement of their student-athletes through college preparation and scholarship opportunities while providing a supportive, encouraging environment that instills a true sense of belonging.

MET partners with barns across the United States to bring its Equine Opportunity Program and positive benefits of horseback riding to youth all over the country.