Adele Paxson, side saddle competitor at Devon and thoroughbred breeder 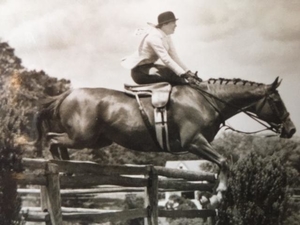 Near the community of Lahaska, Elm Grove is an original Colonial Province of Pennsylvania property, it was granted to Henry Paxson's family in 1680 by Governor William Penn.

As an adult, she rode frequently and was a competitor in the Devon Horse Show.

These photos show her great form while jumping fences at least 4' in height, a remarkable feat.

She and her husband served as Masters of Foxhounds at the Huntingdon Valley Hunt Club.

WHILE ADELE PAXSON owned many champion hunter horses, she gained national recognition with her flat-racing thoroughbreds.

In addition to the Elm Grove Farm breeding operation, Adele Paxson maintained a racing stable in Florida and a barn at the Aiken Training Track in Aiken, S. C. 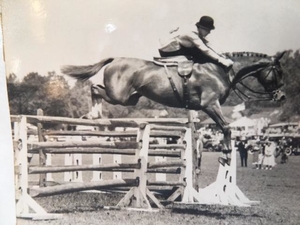 Adele Paxson was the breeder of Heavenly Cause who was voted the 1980 American Champion Two-Year-Old Filly.

That year she received the Thoroughbred racing industry's highest honor, the Eclipse Award for Outstanding Breeder.

In an interview following Adele Paxon's death, Rick Abbott, who managed her racing and breeding operation during the 1990s said of her: "the welfare of the horses always came first," and that "money was not a concern. Working with her was the most gratifying thing I have ever done."

In failing health, during the latter part of the 1990s Adele Paxson began selling off her racehorses and in early December 2000 Rick Abbott oversaw the sale of her remaining bloodstock at the Fasig-Tipton Midlantic mixed auction in Timonium, Maryland.

Jimmy Paxson, Master and huntsman of River Hills Foxhounds, is a distant relative.