PAOLI, Pa.--Dolores A. Swann, 87, who managed shows at her Ashley Meadows Farm in Berwyn, died on Feb. 7 in Paoli of cardiac complications. 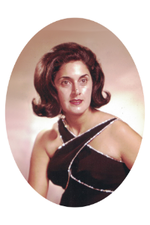 Swann became interested in horses when her daughter Heather started taking lessons, and when Heather graduated from the junior ranks, Swann bought Ashley Meadows as a training facility for her.

She managed her own nationally-ranked horse shows and was active on several key committees of the American Horse Shows Association and its successor, the United States Equestrian Federation.

She served on the Show Management and Exhibitors Committees as well as on the USEF Competition Management Committe.

Along with Judy Richter, Swann polled over 500 amateur owner competitors for suggestions to improve the division.

SWANN HAD strong convictions and ideas, and many of these rankled people and exhibitors at her shows.

She was born in Brockton, a daughter of the late George and Catherine (Aseph) Ackel and grew up in the Ackel family home on Provost Street with her four siblings George, Florence, John, and Gloria.

After graduating from Brockton High in 1949, where she was editor-in-chief of the yearbook, Dolores attended and graduated from Emmanuel College with highest honors.She earned her Ph.D in Romance Languages at Radcliffe College. While a graduate student, she taught undergraduates at Harvard University, and then became associate professor of Latin American Studies at Boston College.

After moving to Pennsylvania, she continued her association with her alma mater by serving on the Harvard University Board of Overseers and the Advisory Board of Radcliffe College’s Schlesinger Library on the History of Women in America. She was also a Board member of the Balch Institute of Ethnic Studies in Philadelphia.

She leaves behind two sons, Paul of Wellfleet, Mass., and Leonard “Tres” of Virginia Beach, Va., her daughter Heather Swann, of Downingtown, Pa., and two granddaughters, Olivia and Gabrielle.

Her Funeral Service was held in the Funeral Home on Feb. 16 followed by burial in Calvary Cemetery.