UPPER MARLBORO, Md.--Melissa Jacobs riding On Ice and Stephanie Danhakl on Quest were grand champions in the Amateur Owner Hunter division at the Washington International Horse Show on Oct. 26. 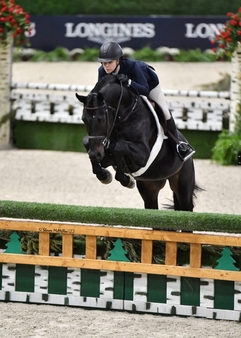 Jacobs, of Buffalo, N. Y., purchased On Ice after trainers Chris Payne and David Belford of New Hope Farm LLC in Batavia, Ohio, discovered the 9-year-old Warmblood stallion by Legion in Europe just over a year ago.

At the time he was competing in the jumper ring, but Payne and Belford saw his potential to become a top hunter.

“He was definitely a little bit jumpery for a while, but he’s picked up on the hunters very quickly,” said Jacobs. “He’s just very game to do whatever we want, so he’s great to work with.

“He is the best thing that has ever happened to me,” said Jacobs of her horse who goes by “Noble” in the barn. “He’s just perfect for me. He’s beautiful, and as long as I do my homework and put him in the right spot, he always gives me a fantastic jump. I love him so much.”

ON THE FIRST day of Amateur-Owner competition, Jacobs on Noble had a mixed performance.

Her jumping round was not the best, butshe won the hack.

“Dave Belford told me to ride like I know how to ride him and just have fun and to try to think of it as just another horse show, which is hard to do, because it is Washington and you know it’s Washington, but it did help me relax a little bit more,” said Jacobs. “Sometimes I’ll get butterflies a little bit schooling and getting ready, and then usually when I get in the ring and get to what I know how to do with Noble, everything melts away, so that’s really nice.”

Noble didn’t show in any of the professional divisions before stepping into the ring with Jacobs, and the first day of the competition was a bit cooler.

As a result, Jacobs could sense both she and her horse were a little tight, but on the second day, they were ready to shine.

“Today, I got on him in the warm-up, and I just knew that both of us felt more open and more relaxed,” said Jacobs. “We went into the handy, and I asked him to go for it and he was phenomenal.”

In the handy class, Jacobs scored 86, followed by an 88 in the stake class for the win in both.

“This is amazing,” said Jacobs. “I have been reserve champion at Washington once, and I have always wanted to come back and win here. I’m just absolutely thrilled. This is a big win, and I’m really excited about it.”

STEPHANIE DANHAKL of Pacific Palisades, Calif., who trains with Scott Stewart, has had Quest for nine years, competing consistently in the Amateur-Owner 3’3” division. 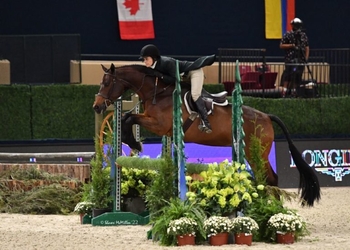 Stephanie Danhakl on Quest (Photo by Shawn McMillen)“He’s a small horse with a big heart,” said Danhakl. “He always tries his hardest and has a lot of spunk. I’ve been competing him at this show the past several years, and this is the first time we’ve been champion, so I’m really excited.”

“He never gets tired of showing,” said Danhakl. “He really loves it. He loves the spotlight, and he definitely loves the recognition and loves to have a blue ribbon on his bridle.”

Like Jacobs, Danhakl,didn't get a ribbon in the first over fences class but won the under saddle..

“He felt a little bit tired to me in the first round, so he struggled going around the course to jump as high and as brilliantly as he typically jumps,” said Danhakl. “He’s always a great mover, so we made up some ground with the under saddle class, but I knew going into today that we had to have two very good rounds, solid performances, in order to be champion and ultimately grand champion.”

On the second day of the division, Danhakl just jumped a handful of warmup fences and scored 89 in the handy class and then 88 in the stake class for two more blue ribbons and the championship.

“He really rose to the occasion,” said Danhakl. “I just tried to keep him energized, focused, and not tire him too much outside of the ring and just save all of our jumping efforts for the show ring. He really gave me his all and tried his hardest and jumped so great today. It was an awesome feeling.”

“I love coming to WIHS,” said Danhakl, who is a member of the show’s Board of Directors. “It’s really special to qualify. The show does such a great job of making it feel important with the awards and the decorations and the pomp and circumstance, which is so much a part of this sport. To come here for our finals at the end of the year, it means a lot to be champion here.”

In the Low Amateur Owner Jumpers, Brooke Kennedy, of Alexandria, Va., won on Hipica in 28.929 seconds, and Skylar Wireman, of Bonsall, Calif., was the only clear round in the Medium section to win on Karen,

In the highs, Virginia Bonnie and Heldorado won in a five-horse jump-off with a time of 33.256 seconds.