U.S.places 7th in Spruce Meadows Nations Cup and McLain Ward is 7th in the Grand Prix 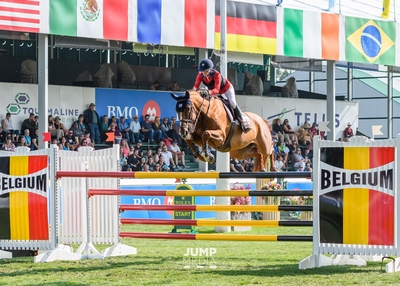 Farrington went first for the team on 9-year-old Landon, and had four faults after the back rail of the oxer in the Mexico-themed in-and-out came down, and added two time penalties for six faults.

With such a young horse, really young to face such a big course, it wasn't a bad result, and this horse looks to have a bight future.

Next for the U.S. was Dello Joio, who was making his senior team debut riding Cornet’s Cambridge.

Dello Joio had both the wall and the ‘b’ element of the  triple combination down, resulting in an eight-fault total score.

The 23-year-old Rinaldi had the wall down plus a time fault for five faults.

“Gia and Nick are new to this, but they did not ride like rookies,” said Ridland of Dello Joio, riding in his first Senior Nations Cup, and Rinaldi, in only her second team line-up. “They really rode well. Their slight mistakes were at the end of the course in the last line. We were one fix away from the second round and being really good. It was great experience for them, and they really held themselves up well.”

In a familiar position, Ward was under pressure to deliver not more than a four fault round the U.S. to advance to the second round of competition.

But Ward on Kasper van het Hellehof retired after only the second fence, leaving the team on a total score of 19 and outside of the top six teams to advance to the second round.

From the second fence to the third was a four stride distance, but Kasper met it on 3 1/2 strides,, and Ward had to pull him out or risk a disastrous fall.

With four faults for a stop plus what he'd have to accumulate in time faults would have been too much to advance the team, so Ward elected to retire.

"Kasper is a very hard horse to ride," said Ridland. "He gets very strong. It was nine strides from the first fence to the second, a vertical, and Kasper got particularly aggressive, so when he landed after the second fence there was no way he could do four strides. I'm sure McLain will figure him out in a little time.

Six teams advanced to the second round in the Nations Cup, and the Swedish team was the winner with a final score of four, while Switzerland finished second on seven faults and Netherlands was third with a score of eight, followed by Mexico, Canada and Belgium.

THE GRAND PRIX was on Sunday, a two round competition in which all the clean rounds from the first round plus the fastest four fault rounds made up the 12 that qualified for the second round.

The accumulated faults from round one and two were added together to determine the final placing.

Only four were clean in the first round, with Ward on HH Azur the fastest of the four to qualify to go last in the second round.

Ward had the first fence of the final combination down for four faults, and with his time of 83.7 from his first round finished seventh.

Three made it into the jump-off.

Switzerland’s Steve Guerdat on Venard deCeerisy, first to go, had one down in a time of 41.70 seconds, then Belgian Gilles Thomas0 on Aretino 13 had two down.

Then all Deusser had to do was go clean, so he opted to take his time, and he finished clean in 45.78 for the win.