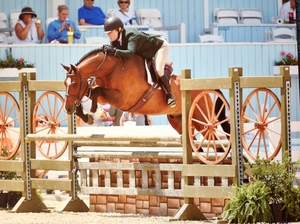 Clementina Brown on EagleRiding Eagle, Brown won the final class of the Amateur/Owner 3'6" section, the handy hunter, on July 7, and that gave her the championship.

"Eagle was perfect in that class," said Brown. "All of the good things about him came forward."

This was Brown's third championship at Summer Brandywine in the four years of the show.

"The first year, 2015, I was champion on Eagle and reserve on Dashing," said Brown. "The second year, Cupido was champion and Eagle was reserve."

"The last year, I fell off in the handy," said Brown. "I was wearing a tight gold wristwatch, and I landed funny. I broke my wrist and was off for eight weeks. I didn't start showing again until Kentucky. I was a freaky moment."

"Summer Brandywine has always been a tremendous show for me," said Brown. 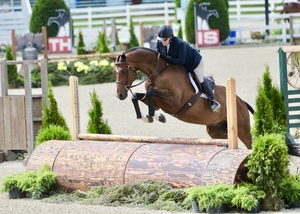 Louise Serio on MonarchBrown is planning to show him, but she's not sure when she'll begin.

"I may not show him until next year, because at so many shows you can't show in both the 3'3" section and the 3'6" section," said Brown. "He's a beautiful horse and a great jumper and beautiful mover. I'm so lucky that Louise found him for me."

"Eagle will get a summer break," said Brown. "He's been going so great. The I'm going to show at the new Princeton hunter show, at Capital Challenge, Harrisburg and The National. I want to finish strong." 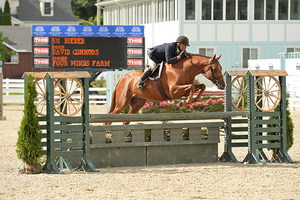 DavidConnors on Bieber (Photo by Anne Gittins Photography)"Bieber is awesome," said Connors. "I think we've owned Bieber for three years, and he is the most easy-going, lovable, kind horse I think that we've ever had. He's the sweetest. It was kind of a last minute thing we decided to do because he had been entered in the 3'3'' Greens. He was great. He's just so easy going and he was really good. It was exciting for me because I haven't had a chance to do the 3'6'' for awhile."

"Actually, Grand Champion was awesome ,because Bieber is such a great horse and we love him," said Connors. "To win that Leading Professional Hunter Rider award, I was like, 'You guys, I'm approaching 60 years old and I have been doing this since I was a kid, and I think this is the first time I've ever won the leading rider. To win the Lannie Lipson Riders Bonus, that was awesome. That was a great thing that she did giving that award out so that was very nice."

"Brandywine is the show I look forward to the most in our calendar of showing," said Connors. "It's close to where we keep our horses in New Jersey and everything about this show - the staff, the jumps, the footing, the hotels, the restaurants, it's all great. They go above and beyond at this horse show to make it nice for all of the exhibitors."

In the 3'-3'3'' section of the $5,000 USHJA Green Hunter Incentive, it was Laena Romond and Traveller, owned by Catherine Cowie, that claimed the championship with a score of 85 in the first round and 89 in the second round. Ferrell took home yet another award as she received the reserve championship riding Dapper, also owned by Bulger.

The Lannie Lipson Riders Bonus was awarded in memory of Jared Lipson, and is given to the top three professional hunter riders that have accumulated the most points throughout the two weeks of competition at Brandywine.