TOKYO, Japan --The U.S. Para Dressage Team had its first two riders compete in Para-Dressage at Equestrian Park in Tokyo, Japan, opening the first day of equestrian competition at the Paralympic Games Tokyo 2020. 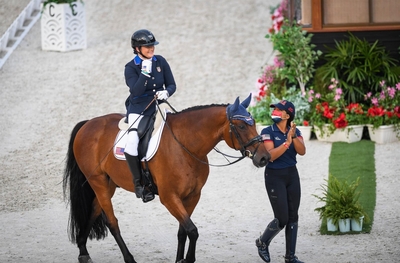 Both qualified for their Grade's FEI Individual Freestyle to Music on Monday, August 31.

De Lavalette and Clarc made their Paralympic debut, and completed a solid test to open Grade II competition.

They earned a 70.265 percent from the ground jury to put them into fifth place in Grade II competition.

De Lavalette is also the first U.S. rider to break the 70 percent mark in a Paralympic Games, setting an early tone for the team rides ahead.

“IT WAS A very enjoyable ride,” said de Lavalette. “I went through my test about a thousand times. I wasn’t really nervous, but just excited. The excitement took over and I knew my test, I knew my horse was right, and we were together and in sync, so I couldn’t be happier with the ride.”

De Lavalette of Lake Worth Beach, Fla., has said that competing at the Paralympic Games and representing her country is one of the main motivating factors in her incredible recovery and return to sport following the 2016 Brussels Airport bombings.

Riding her recently acquired mount, Clarc, de Lavalette commented on the meaningfulness of the Paralympic journey and what it felt like to make her international championship debut.

“It is such a great honor to be here representing the U.S. at this competition and being able to have fun with my horse out there after five years of fighting for my life," she said. "It was really very emotional for me at the end. Setting the goal of being here five years ago when I was in the ICU was a dream and being here today is a dream realized and I couldn’t be happier. I’m very proud of myself and my team because without them I wouldn’t be here.”

Kate Shoemaker and Solitaer 40 are also making their Paralympic debut after contesting their first major international championship with the U.S. Para Dressage Team at the FEI World Equestrian Games Tryon 2018.

Shoemaker earned a 70.854 percent from the judging panel in an extremely competitive first day of Grade IV competition, placing her seventh out of 15 competitors.

“I’m really pleased with my horse, though a little bit disappointed with the score of course since we had hoped to be in the medals and I felt our ride today was quite good, but all I can do is be happy with my performance in the ring and I absolutely love my horse to pieces,” said Shoemaker. “The energy in there was phenomenal. It just gives you a sense of power and the horses can feel it and it’s just so much fun.”

Shoemaker of Wellington, Fla., and Solitaer 40 have been partnered together for the entirety of both of their international careers and achieving this selection to the U.S. Para Dressage Team for the Paralympic Games is the highlight for Shoemaker and her team.

Working through the 2020 and 2021 seasons to continually improve their marks in both the Individual and Team tests, the pair have become a consistent combination for the team.

“We’ve been showing together for a while now and this is the end of our seventh year together. It’s a partnership that’s been a long time coming,” said Shoemaker. “He loves championships and when you add that little bit of energy, he really turns into something special and it’s a feeling like none other.”