MILL SPRING, N.C.--Zone 1, with a total of 8 faults, edge out Zone 2, with 11 faults, to win the team gold medal in the Prix des States Team Championship, which was moved from Harrisburg, Pa. to Mill Spring due to Covid-19. 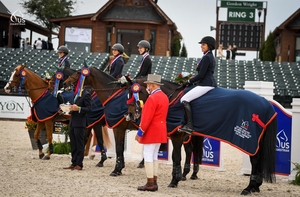 FIELD produced the only two double clear rounds for Zone 1.

“My first round was my best round," said Field. "I went in and was really trying to hold her off the jumps and go clear for my team. When I walked the course, I thought it would be really good for my horse because a lot of the lines were forward and she’s very adjustable.”

Seving and Brighton Bay anchored the Zone 1 team and in their second year competing in team championships, produced a clear effort in the first round.

Sevin had a comfortable second round as the final combination in for Zone I, knowing her teammates’ rounds had already secured the gold medal.

“It definitely can be nerve wracking riding on a team because when you’re riding for yourself, you can only let yourself down, but when you’re riding for a team, you want to make your teammates proud too,” said Seving. “It was nice going into the last round because we had already secured gold, and I could take a deep breath. My team got it done early and it’s so fun to be on such a good team.”

The silver medal team from Zone 2 included Sophee Steckbeck of Clarksburg, N.J., on her own Alania, Madison Rauschenbach of Newburgh , N.Y., and her own Gillette B, Gigi Moynihan of Oldwick, N.J., on Erle, and Mimi Gochman of New York, N.Y., with Celina BH, and Krista Freundlich served as Chef d’Equipe.

A jump-off for bronze saw Zone 10 of California narrowly edge Zone 5 to clinch third place after both teams tied on 12 faults.

“I was sitting in silver, so I just wanted to have a nice, consistent clear round. When I walked the course I thought it was technical, but very fair and really good for my horse and I was excited to jump it,” said Lindemann Barnett. “I also would like to thank Neue Schule, my parents, my trainer, my horse, and my groom for this amazing opportunity.”

The final course, designed by Michel Vaillancourt of Canada, featured 12 jumps with 15 jumping efforts at 1.40/1.45m with a time allowed of 74 seconds.

Lindemann Barnett of San Francisco, was double clear after she was clear both rounds of Phase II, with 5.5 penalties after the conversion from Phase I.

She also won a bronze medal representing Zone 10 in the  Prix des States Team Championship earlier in the week.

“His name is ‘Chops’ and I’ve had him for about a year and a half now," said Lindemann Barnett. "He’s the most special horse. He has the biggest personality and is always so hungry. He’s like a little garbage can, but we love him and he’s a barn favorite. I had never jumped 1.40m before I got him, and I jumped my first 1.40m on him, my first High Junior Classic, and this was my first time at Prix des States. He’s really taken me around a lot of big firsts for me.”

“This was such a great experience," she said. "In the near future, I’d really like to step up to the CSI 2* and CSI 3* levels next season, and then long term, I’d really like to have the opportunity to jump on a Senior Nations Cup team and keep enjoying the horses and continue learning,” she said.

Capturing the individual silver medal, Gochman had eight penalties in Phase I, leaving her in the middle of the pack heading into the weekend.

Clean rounds in Phase II and III resulted with zero additional penalties,giving her a final score of eight penalties, and she had a second silver medal as a part of Zone 2 in the team competition.

Seving of Zone 1 had a total of 8.5 penalties over the course of three days of competition to win the individual bronze.