UNIONVILLE, Pa.--Phillip Dutton of West Grove, Pa., has been the backbone of America's eventing teams at the Olympics and World Championships, and now another Dutton, Phillip and Eve's daughter Olivia, has a high placing at a top level event, having finished second in the CCI2*-S at Plantation Field riding Iniesta. 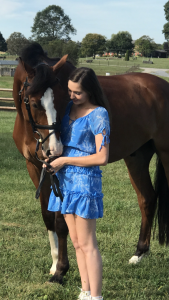 Olivia DuttonPhillip, riding Z, also finished second in his division, the CCI4*-S, to Elisabeth Halliday-Sharp of Lexington, Kentucky, who led from start to finish to win the CCI4*-S riding Deniro Z.

She loved riding Chocolate Mousse, who was the family pony, and at the age of 10, Olivia started eventing competitively with The Dude, with whom she had many successes.

She then competed Santa’s Playboy, an OTTB who had competed Advanced with his owner, Amy Borun.

Santa and Olivia were Reserve Champions at the Mid South Three Day CCI** in 2016.

Olivia is now competing her own, Iniesta, who was bought as a 6-year-old from Holland.

OLIVIA and Iniesta are moving up the levels and are enjoying many successes. 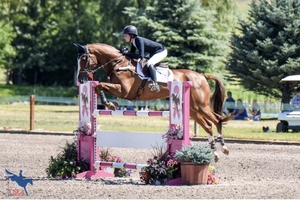 Olivia Dutton on Mr. MendicottOlivia is a graduate of the Foxcroft School and attending the University of Kentucky, and when she is not in school, she works at the barn for her father and mother.

“She just started at the University of Kentucky, where she’s studying business, and she flew in to compete this weekend," said Phillip. "She won the dressage and had a little time on the cross-country yesterday, then jumped around clear today. This was the horse’s first FEI class and she was really pleased with him. She’s got Mighty Nice with her in Kentucky, so she’s still riding regularly.”

Dutton, who sits on the Board of the event, said, “I thought it was a great competition and the cross-country caused a little more trouble than expected – the time was tight and there were quite a few riders having a crack at the it.”

As for the event, Dutton said, “It would’ve been ideal to have spectators, it’s too bad they weren’t allowed due to Covid-19. A couple months ago we were trying to decide if we could actually do an event this year, and we had to keep it kind of bare-bones since we wouldn’t have spectators, etc. coming in. But people wanted to run their horses and we wanted to give them that opportunity. All credit goes to Denis and Bambi Glaccum and Mary Coldren, who put it all together.”

Halliday-Sharp rode two other horses at this level as well as one in the CCI3*-S. 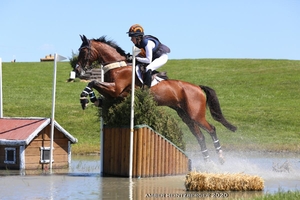 Halliday Sharp on Deniro Z (Photo by Amber Heintzberger)“Deniro Z is such a star,” said Halliday-Sharp. “I rode him around his first event ever, a few years ago now, and we’re just a good team. For the most part I felt the round was spot-on, I wanted to finish on the optimum time, I didn’t want to come in way inside the time or anything crazy, I just wanted a good round. I had a little bit of an exciting moment at the first water where he jumped so big over the jump in and then got really deep to the skinny and he sort of hooked a little leg and smacked me in the face, so I was seeing double on the way to the coffin, but luckily my vision came back just before we had to jump in! It shows what a great horse he is, he didn’t look at anything. He’s a world-class horse and I’m just lucky to ride him.”

She said she plans to compete him at the CCI5*-L at the Tryon International Equestrian Center in November, and has her eye on the US Eventing Team at the Tokyo Olympic Games next summer.

“The course today rode fantastic," said Baughman. "The ground was quite quick, so I let him cruise along; there were quite a few turns that slowed everyone down but he just ate it up and I let him go.”

Canadian Holly Jacks-Smither of Ontario claimed the award for the top-placing Thoroughbred when she finished fifth with More Inspiration, a horse that she galloped on the track and got off the track at age 4 and has competed internationally in eventing at Aachen, Germany and Pau, France.

“He’s a true five-star horse." said Jacks-Smither. "He’s a horse that I can choose where I take him out now, he’s 15, and I decided to go for it this weekend. I might put him away for the season, or maybe take him to Tryon. I’d like to take him to Kentucky next year or maybe Burghley.”

If she can get an athlete’s exemption to shorten the mandatory two-week quarantine when she returns to Canada from the US, along with a clear Covid test, she hopes to compete at Bromont in Quebec in two weeks’ time.

Earlier in the day Halliday-Sharp had a fall when she was riding Flash Cooley around the four-star, which left her with a black eye.

“He’s still green and very careful, and he just panicked a little and jumped into the middle,” she said.

Cooley Quicksilver finished 13th overall, and Cooley Be Cool finished fourth in the CCI3*-S, which was won by Maya Black on Black Ice.

The future of the event is in doubt due to a dispute over the name of the competition that prompted the landowner to terminate the lease on the property.

“I had numerous people come to me today telling me this is an institution that we can’t afford to lose," said Dnis glaccum, President of Plantation Field Equestrian Events.." This event this weekend went as well as any event I’ve been associated with, which is due to the expertise of the volunteers. We have people who have volunteering with us since 1986 and they all feel a great sense of pride over being involved with this. Hopefully we can keep it going somehow.”

“It’s a beautiful venue and they’ve put a lot of effort into it, so it’s a big loss and on top of that it leaves a big hole in our calendar,” said Baughman.