UNIONVILLE, Pa.--Plantation Field reopened Eventing  on June 7-8 after almost three months of all events being shut down due to Covid-19. 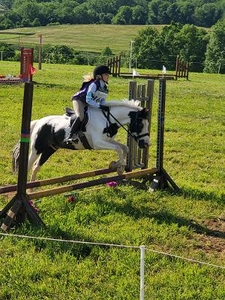 Elisabeth Tansey from Bedminster, NJ competed Sunday at her very first event at Plantation Field aboard her pony Oreo. She has been working so hard practicing and taking lessons and was so excited to be able to compete and walk away with 2nd place.
Clarissa Wilmerding is Elise's trainer. Elise rides with Somerset Hills Pony Club. (Photo by Tina Marie Powell, a fence judge)This past weekend saw competitors returning to the field of play at three events across the country: River Glen in New Market, Tenn.; Feather Creek in Norman, Okla.; and Plantation Field in Unionville.

The USEA was on the ground at Plantation Field on Friday to observe the joy and excitement of the first day back competing since mid-March.

From contactless packet pick-up and temperature checks at the entrance to drive-thru fence judge orientation, there were plenty of changes to be seen around the event designed to keep competitors, staff, and volunteers safe.

“We knew we had to get this right and we had to do it in a way that people outside the eventing world could see that this is a no-contact sport where we can maintain social distance,” said Mary Coldren, Plantation Field’s event organizer. “It was important to us to show that this can be done in a way that follows CDC guidelines and hopefully it will benefit other events for the rest of the season. I sent an email to the competitors last week that said, ‘All eyes are on us. This will not look like pictures you see at the beach. We are going to wear masks and we are going to social distance. We’re going to do this right.’”

Coldren said it came down to the wire as far as gaining approval to run, as Pennsylvania only entered “Phase Yellow” on Friday – the stay-at-home orders for Chester County extended through Thursday night.

“We didn’t get permission until 8:45 p.m. on Monday night,” she said. “All along, no one would say, ‘yes,’ but no one said, ‘no’ either. That was one of the hard parts – are we or aren’t we, maybe we can, maybe we can’t? Two weeks ago, I thought we had no chance. We rolled the dice and got set up and got lucky that it worked out!”

Coldren noted that special thanks was due to Denis Glaccum, President of Plantation Field Equestrian Events, Inc., for making sure the event got the go-ahead to take place.

“He really deserves the credit for having a positive attitude and making the presentation that got us the permission to run. I was doubtful, but he never gave up!”

“THE WHOLE concept of trying to put on an event with no face-to-face interaction with people has been challenging,” Coldren said. 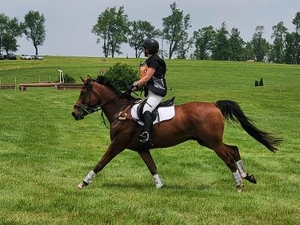 Gretel Frew, a member of the Seneca Valley Pony Club and USEA Area II Young Rider Advancement Program riding Union Commander a 6 yo Selle Francais/Arabian cross, coached by Chris Donovan. (Photo by Tina Marie Powell, a fence judge)Instead of allowing competitors into the secretary’s office on the day of the event, competitors were encouraged to email ahead of time with questions.

For day-of issues, important phone numbers were posted around the event so competitors could call instead of going to the secretary’s office.

“Trying to get everything set and settled prior to arrival was key, so then when competitors arrived they could just compete and didn’t have to deal with any administrative stuff. It was a huge culture change, but in a lot of ways it made the day of a lot easier.”

“The competitors have been spectacular,” Coldren said. “They’ve been completely patient with the delays in scoring, avoiding face-to-face contact, doing things digitally and electronically. I think they were all just so happy to be out here and they realize the struggles that we’re having to meet all these new guidelines and procedures.”

“I think the thing that I miss the most is that Plantation usually has quite a hospitality aspect for all our volunteers and officials and everyone else,” Coldren said. “I think not having burgers on the grill or cinnamon buns for the volunteers in the morning and everyone hanging out having lunch together, that part of it I miss. But we just couldn’t do it this time. And to see the side of the hill here with no spectators on it – normally we have a good group of neighbors who come out and sit on the hill to watch the event and having had to say ‘no spectators’ was tough to do, but everyone understood.”
Judges were seated in separate cars to help maintain six feet of distance. USEA/Jessica Duffy Photo.

Plantation tackled the issue of social distancing for the dressage judges by having the judge and the scribe park their cars next to each other and speak through the open window (or by walkie talkie if the weather required them to roll up their windows.)

“Judging with a scribe has been a bit of a challenge,” said Anne Moss, one of Plantation’s dressage judges, “but it’s actually worked surprisingly well. My scribe has been taking the scores on one sheet, and I have a separate score sheet where I do the collective marks, and then they get stapled together. We’ve been putting our papers in plastic folders that have been sanitized, my bell was sanitized, we’re all wearing masks when we’re within six feet of each other. It’s definitely a little different, but Mary Coldren has done a fantastic job organizing all this and thinking about the safest ways to move forward.” 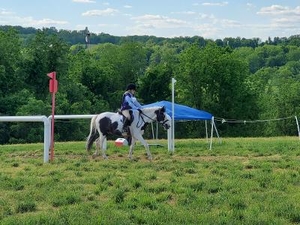 Elizabeth Tansey on Oreo setting off on cross country (Photo by Tina Marie Powell)Moss commented that she was impressed by the quality of the work she saw horses and riders putting forward in the sandbox and that the extra time people had to do their homework really seemed to have paid off. “It’s been an interesting spring for all of us, and it was nice to see that everyone has had extra time to practice their dressage!” she said. “I saw some really lovely tests. I was judging Intermediate this morning and sometimes for those horses, maybe it’s their first season and they’re still struggling, but I saw a lot of strengths out there today which was great to see.”
It was exciting to see horses and riders out on course! USEA/Jessica Duffy Photo.

Kristin Schlachter, an eventer who operates Silverhorn Equestrian just down the road from Plantation Field, said she was a little bummed she wasn’t riding this weekend but was happy she could come out and lend a hand as a fence judge for the afternoon. Fence judges were asked to watch the USEA Jump Judge Instructional Videos ahead of time and then were given a short orientation from the Technical Delegate over the radio once they were in place at their fences. “I’m so excited,” she said of being out at a horse show for the first time in months. “The weather is beautiful, the ground looks amazing – everything is wonderful. I wish I was riding, but I’m also happy to be volunteering.”

Steve Berkowitz was the on-site veterinarian from Unionville Equine Associates at Plantation on Friday and observed that, with respect to the new COVID-19 restrictions, most everyone was respecting the new guidelines. “Everyone is doing everything we’ve been told to do and we’re very aware of the responsibility we have to follow the rules and set a good example for everybody else,” he said. “So far, today’s been very good. Usually it goes very well here – Plantation Field has a great team. The footing’s always good, they have the best people, we’ve been helping out here for years, and everyone knows what to do.” 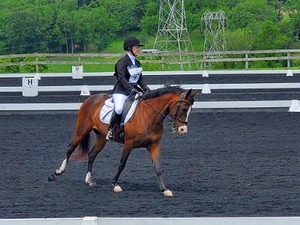 lBrita Tansey riding Calliope placed 2nd in Beginner Novice level. Clarissa Wilmerding is her trainer. (Photo by Tina Marie Powell)Cross-country course designer Jeff Kibbie pointed out that, because of the competition suspension, Plantation Field was actually the first event on the Area II competition calendar to take place in 2020. Because it was effectively the beginning of the season for many riders, he said, “I tried to keep the courses nice and open so everyone could get out there and have a good gallop and a good ride. Hopefully everyone’s horses are coming across the line more confident and happy.”
Jennie Brannigan was all smiles to be back in the ring. USEA/Jessica Duffy Photo.

Jennie Brannigan, who had five horses to compete on Friday – three in the Intermediate, one in the Preliminary, and one in the Training – said that she was pleased to see how easy it was for everyone to social distance. “I think Plantation did a great job of keeping everyone far away from each other and keeping the entry numbers low, so that was really good,” she said. “I think it felt very safe because everyone was really far away from each other. It made me realize that eventing is actually able to do this and still be socially distant. I feel confident that it was a good day for the sport and everyone was safe.”

Brannigan explained that, with the exception of a couple weeks off at the beginning of quarantine, she’s been keeping her horses going throughout the suspension. “I think quarantine’s been good because we’ve trained our horses well – I’ve had a ton of lessons with my show jumping trainer Scott Keach and my dressage trainer James Burtwell, and then of course working with Erik Duvander,” she said. “And my whole staff is feeling revived because we’ve been getting done at a good time and we’ve gotten a lot of things cleaned so that’s been good.” Today was a chance for some of her horses to get out and stretch their legs in preparation for the fall season.

“I’m happy with the way things came out,” Coldren concluded. “Are there are some things that we could have done better or differently or more efficiently? Yes. But there has been no place that you see a gathering of people, and to me that was an important goal to have and we achieved it. Even in the parking area and up on the hill people were really respecting the guidelines. If you see three people standing together, they’re all from the same household.”