WASHINGTON, D.C.--Sydney Shulman of Greenwich, Conn., won the $50,000 International Jumper Speed Final on Villamoura, making it two in a row for her, while Aaron Vale and Schuyler Riley shared the victory in the $25,000 Land Rover Puissance at the Washington Internationaal Horse Show on Oct. 25. 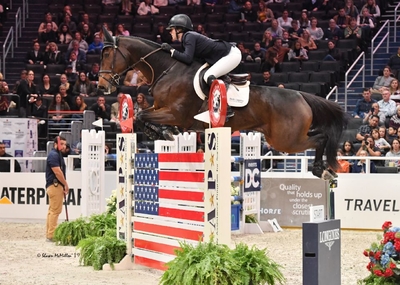 Sydney Shulman and Villamoura. (Photo by Shawn McMillen Photography)Competiing at Washington in the international jumper division for the first time, Shulman, 24, came with a pretty specific goal.

“I came here with the plan to do just these two speed classes and hopefully be in the top five, with all these elite riders in the classes,” she said.

She ended up winning both of them, having won the $36,000 International Jumper Accumulator Costume Class the night before.

“I’m definitely in shock,” Shulman said. “Coming out on top in both of these classes is definitely beyond my expectations, so I’m thrilled.”

Shulman’s time of 50.84 seconds was untouchable, with Australian Rowan Willis coming the closest, stopping the timers in 53.19 seconds for second on Everse W, and third going to Andy Kocher on Cat Ninja, who had a time of 53.58 seconds.

“I WATCHED the video, and it looked much faster than it felt,” Shulman said. “She’s a really fast horse; she covers the ground so fast. I did 10 strides on the rollback to the second jump, and other people did eight strides, and she still looked faster in the video. My plan was to go inside to the American flag plank and do six strides there. I caught such a good one and she felt so amazing and is so brave, I went for the five and she walked it. I think leaving a stride out there is maybe what sealed the deal for me.”

“I thought the course was challenging for sure,” Shulman said of Olaf Petersen, Jr.,'s track. “There were a couple of harder turns, and the triple bar into the triple combination is always difficult. You want to cut the turn and be fastest, but a triple bar is hard enough to jump on its own, let alone into a combination. I think you needed a game horse and a horse that was really in front of you, because the turns took away a lot of your canter.”

A year ago, Shulman wasn’t sure if Villamoura would ever jump again.

Villamoura scratched her eye while stabled at a show in September 2018 and needed eight months to heal.

“It just took time,”  said Shulman who stayed with the mare for her first month at the clinic.

Luckily, Villamoura’s eye healed well, and she retained her vision.

“I knew she would come back in some capacity once we realized her eye was going to be fine,” Shulman said. “The key was building her fitness back up. I have to give a lot of credit to our staff at Back Country Farm. It was around-the-clock care getting her healthy, bringing her back, and getting her fit. The whole team was involved, emotionally and physically. I’m really grateful to everyone for it.”

“I have to stick to my plan,” said Shulman, who is going to skip the World Cup on Oct. 26. “Obviously, she could not have jumped better. I don’t think she touched a jump all week and it was fantastic, so I’m just going to end on this note.”

THE NIGHT before, Shulman won the $36,000 International Jumper Accumulator Costume Class on Villamoura as the fastest round of the nine riders who picked up 65 points over the jumps, finishing in 41.04 seconds. 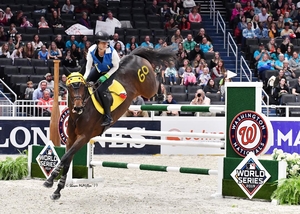 Sydney Shulman and Villamoura (Photo by Shawn McMillen Photography)“I looked at the list of riders, and I had dreamed to be in a class with these people, let alone to beat them,” Shulman said. “So I’m going to really remember this! It’s special to be here.”

The first through ninth place riders all collected 65 points, which meant they cleared all 10 jumps on course, including the final “joker” fence worth 20 points.

There was also a special Washington Nationals World Series fence on course, and Shane Sweetnam dressed up as Nationals shortstop Trea Turner in honor of the baseball team’s World Series appearance.

With nine riders out of the 24 starters on the same score, the class results came down to speed.

“I watched some horses go, and after Adrienne Sternlicht went, I thought, ‘There’s no way I can be faster,’ but I had to try,” Shulman said. “My horse doesn’t have nearly the size of stride that she does. I had to think about being faster in the turns and across the ground. I added strides in two places that she left a stride out, but for my horse that’s what works.

“I’ve had Villaoura since she was a 6-year-old and brought her along,” Sulman said. “I live for this horse. She is my pride and joy. Every time I ask her to do something, whether it’s a bigger grand prix than she’s ever done, or any speed class, she totally steps up her game. She was my main speed horse as an 8- and 9-year-old, but now she’s had to step up a little bit and be my main grand prix horse. She’s done everything I’ve asked her and more."

Riders dressed themselves and their horses in costume for the class, and Sydney asked her students for ideas for her costume.

“We wanted something fast, because the horse is very fast, so they thought of Pikachu, who is a lightning bolt. So, then I automatically became the Pokéman trainer, Ash,” Sydney said. “When we were walking the course, I threw 30 plush Poké balls out into the crowd. And the kids I threw them to were so excited at the end when I won.”

The Best Costume Award was won by Kristen Vanderveen, who dressed as Cruella de Ville riding Faustino de Tili, who was decorated to look like a Dalmatian.

AARON VALE and Schuyler Riley share the win in the $25,000 Land Rover Puissance that came down to a battle between a three-time WIHS puissance-winning horse and a horse contesting the class for the first time. 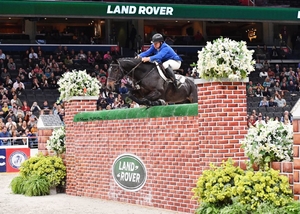 Aaron Vale Finou 4 (Photo by Shawn McMillen Photography)In the end, they tied for the win, with both Aaron Vale and Finou 4 and Schuyler Riley on Very Chic Du Tillard clearing the 6'9" height.

Vale and Finou 4 had won the class the last three consecutive years and were hot favorites.

“There was a good group of horses and riders tonight, so it was a little tougher class than maybe the last few years,” Vale said. “You never go in thinking you’re going to win.”

Very Chic Du Tillard was jumping in his first Puissance class and had spent the majority of his show experience at the 1.45m level.

“I knew he has the scope and the talent, but I knew he’d never done one before, so I sort of expected to go in there and jump one or maybe two and then come out, but he jumped it so easily,” Riley said. 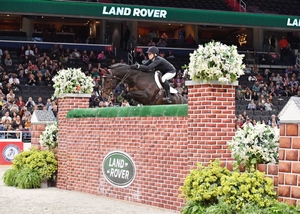 Schylar Riley on Very Chic Du Tillard (Photo by Shawn McMillen Photography)Only Riley and Vale cleared the 6'9" height, and both returned to attempt 6'11", but when they both knocked blocks off at that height, the class ended in a tie between them.

The Puissance is a favorite event for Vale, who has now won the class six times.

“In America, we don’t have great crowds too often, and this night is one of the best crowds of the year for the Puissance here,” he said. “It’s a special class because so many people watch it and enjoy it. It’s loud cheering, and it ends up being a great crowd.”

Riley believed the cheers of the crowd helped her horse.

“He started to like it in there,” she said. “Earlier in the day, he wasn’t so good in the speed class; there was so much atmosphere that it undid him a little bit. But as the night went on, the atmosphere was helping him. He grew because of it instead of shrinking, which was a cool experience.”