HARRISBURG, Pa.--Emma Fletcher, 17 of Buzzards Bay, Mass., survived through a first round of 239 juniors who had qualified through the year, a second round of 25 and a final test of the top six, and almost 12 hours of competition, to win the Hunter Seat Medal final at the Pennsylvania National Horse Show on Oct. 13. 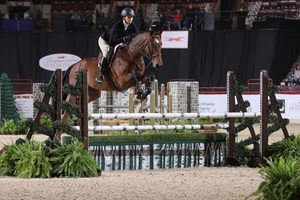 Emma Fletcher on Bournedale (Photo by Al Cook Photogaphy)"This win just means everything to me," said Fletcher, who rode Bournedale. "Growing up with a trainer as a parent (her mother Kathryn Fletcher), you watch it and you want to do it, and today I got to do that and know I could do it. It means everything, really."

Bournedale, one of the youngest horses in the competition, showed poise and composure with only having one Final under his belt, the USEF Show Jumping Talent Search Finals - East.

"When I tried him, he had a great canter and an amazing brain," Fletcher said. "He's come along so well and is just one of the best minded horses I've ever sat on. He's fantastic."

AFTER THE preliminary round, 25 were tested over an abbreviated second course requiring a hand gallop, counter canter and a demonstration of a sitting trot.

The top six then returned for one final test where they had to transition to walk between lines, canter fences in the opposite direction, and demonstrate a turn on the haunches.

"I'm very excited because I had the privilege of choosing between two horses that I love," Fletcher said. "Every jump presented itself nicely and Bournedale ate up the lines, his stride is large, and it just worked out well. I'm just excited to make my parents super proud."

According to judges Cynthia Hankins and Kip Rosenthal, the top 14 riders all scored in the 90's, and final placings came down to just fractions of a point. 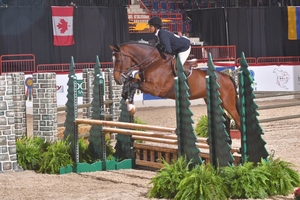 Jordan Allen on Quite Cassini (Photo by Al Cook Photography)Jordan Allen of West Bloomfield, Mich., was Reserve Champion, riding Quite Cassini, a 15-year-old Holsteiner gelding who was given the Best Equitation Horse Award.

Allen was third to ride in the work-off, but her beautiful final test gave her the edge over fellow competitors.

While the judges were sure of their winner, not everyone watching the class came to the same conclusion.

Tom Brennan and Brian Moggre, last year's winner of the Medal Final, were the commentators on the live feed, and their consensus was that Allen was the best, and opinion shared by others in the audience.

Allen's final round was superbly smooth, and her walks were excellent.

"The class started out great," Allen said. "I have the mecca of equitation horses, and I just feel very lucky to ride Quite Cassini. No one deserves a horse like him, so it was very exciting. The first round was one of the best rounds. I'll remember that for the rest of my life. He didn't put a foot wrong all day." 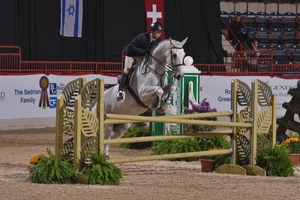 Walker's preparation for the Dover Saddlery/USEF Hunter Seat Medal Final was slightly different than his fellow competitors', but it still paid off in the end.

"I haven't ridden Waldo for a few months because I'm based in Canada and Missy is here in the States," Walker said. "We just never ended up connecting after Lake Placid, but I can say when I was home, I stayed dedicated to make sure I was preparing myself the best that I could. It was nice to get here and get back on Waldo. We didn't skip a beat, and I'm really proud of him today."