DEVON, Pa.--Iron Spring Farm of Coatesville, Pa. had the two highest scoring horses on Sept. 24,  the first day of Breeding competiton at Dressage at Devon. 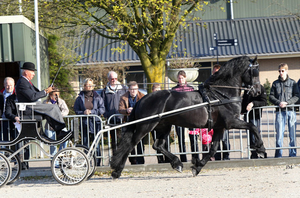 Iron Spring Farm's Tjalbert460, sire of Gypssy ISFIt doesn't get much cuter than watching foals as they first experience the Dixon Oval.

From the adorable Haflingers to the impressive Hanoverians and Oldenbergs, more than 15 breeds showed spectators what careful breeding can do to develop and strengthen a breed.

Kandyvrowe , by Glocks Toto Jr. out of Fergievrouwe, a 2015 mare bred by M.Hendrikden-de-Rijk, and owned by Iron Spring

Gypsy ISF, by Tjalbert 460 out of Goaitske fan e, a Friesian bred by Iron Spring Farm, scored a 80.60

Sophistikate, a Hanovarien handled by Francine Gentile, was third high scorer with a score of 79.250.

MANY OF the breeds, Hanoverians, Oldenburgs and Dutch Warmbloods are familiar favorites. 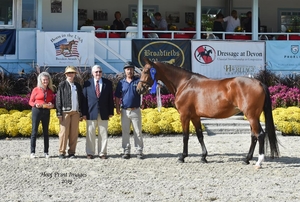 Kandyvrouwe (Photo by Ginny Simon)Others, while well-loved an appreciated by their owners and breeders, are not so well known.

Also known as “Tuigpaard," Dutch Harness Horses are a warmblood breed of fine driving horses that began in the Netherlands after World War II.

These work horses primarily worked in farms and fields; however, horse owners became intensely competitive and desired to breed the finest and most elegant horse as horses were a status symbol to farmers when they would visit the town.

As a result, breeders aimed to produce a refined, high-stepping horse that are easily recognizable.

With only 40 sires and less than 2,000 broodmares there are not many of this breed.

"This breed is one of my favorite to work with because of their easy going nature and movements," said Aaron Jay Fisher, a six-year breeder of Dutch Harness Horses. "Their happy character makes training and working with them easy.”

And they do well in the dressage world because of their unique movement, specifically their strong hind end working to push their front end into an extension, according to Fisher.

OF COURSE, every horse has a story ,but some are a bit more unusual than others, like Aurora, who showed in the Filly of the Current Year class with her adopted mom Cara Mia.

Aurora (know as Ora) is the third filly by Luminere, a PMU filly adopted by Mary Ann Luke of Silver Fern Farm.

MaryAnn Luke of Silver Fern Farm in Earleville, Md., had been thinking about breeding after braiding at Hilltop's Inspections.

The night prior to a scheduled repro exam on a mare she currently owned, she came across an adoption page for PMU babies and thought it was something she could get behind.

So the following day, she decided to adopt the grey PMU filly instead.

The rest as they say was history.

She brought the six-month old filly home from Alberta, Canada in 2001 and thought she may name her Aurora as her current competition horse was "Northern Lights".

With the new filly in tow and while listening to the radio her next fateful event took place.

The day she arrived the Northern Lights were going to be visible from her home, and that solidified that her name was meant to be Aurora, show name "Lumiere" which means light.

Fast forward, MaryAnn bought her farm in 2012 and had two fillies from Lumiere, each of which were special and encouraged her to keep going.

The decision to breed her was difficult as she was not your typical choice to create a fancy Sport Horse.

This is a true rags to riches story of the filly with no bloodlines, who became a lovely Dressage horse and would go on to compete in multiple disciplines; even taking on an occasional up down lesson.

Her great character spoke for itself, and MaryAnn knew it was a great match for Riverman, so she decided to push forward once again with her dream of breeding.

Once SF Rama arrived in 2015 she knew she had made the right choice.

Then came Silverfern Rakaia in 2017, who was a Premium foal.

MaryAnn says her foals fool everyone who meets them, including judges.

You see Aurora was a Percheron x QH cross, so her foals are actually 1/4 draft! This mare certainly bettered herself each time.

Mary Ann knew from day one that she had something special.

“Ora came out so balanced, exhibiting everything she needs to be a dressage horse within a couple of weeks – she knew where all her feet were and had gloriously wonderful movement.”

MaryAnn’s plans for the filly were now very up in the air.

Cara Mia had not had a foal this year, but was always an auntie to Ora from birth. Cara Mia started lactating within three days of Luminere’s death and became a full foster mom purely by her choice.

MaryAnn took her to the Oldenberg Inspection at Hilltop but with some trepidation.

Ora had been depressed for the five weeks between her dam's passing and her inspection.

Much like her father, said MaryAnn, she “played for the crowd” once she got there, so she ended up as the high scoring filly, but also the high score of the day, beating the colts as well.

A true tribute to Aurora's quality are her three fillies, three Premium type foals from a PMU mare who would have otherwise ended up bound for a slaughterhouse.

Both Cara Mia and Ora are competing in the prestigious Dressage at Devon in the Breed Division.