LIMA, Peru ---Boyd Martin, Lynn Symansky and Doug Payne are in the top five individually as the U.S. Eventing team is 26 points ahead after the cross-country phase at the Pan Am Games in Lima on Aug. 3. 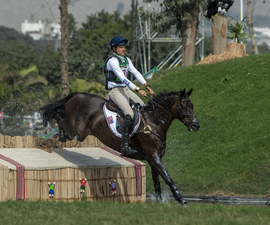 Each of the four riders completed the intricate course, with Lynn Symansky and Martin producing the only two double clear efforts of the day

The U.S. Team sits on a team score of 91.2, while Brazil moved into second with an overall score of 117.7 and Canada holds third place with a combined score of 183.7.

Chef d’Equipe Erik Duvander was pleased with the overall response of the team to the challenging track designed by Argentinian Jose Ortelli which saw 42 combinations start and 25 finish.

Three of the four U.S.riders are currently placed in the top five, while Smith is currently in 19th.

“WE WERE pleased that we analyzed the course accurately and set up individual plans for each combination," said Duvander. "I think we got that right. However, as we walked the course from day one, we knew that this was going to be tough, even for Boyd, who has the horse that was second at Kentucky, and is the most experienced in our group. He said it rode really tough. It wasn’t an easy track to get around.” 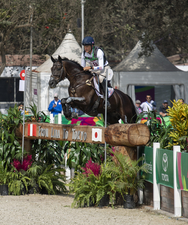 Boyd Martin on Tsertserleg (Photo by Sarah Miller MacMillan photography)Duvander elaborated on the strategy behind the team order and its benefit to the group, as Symansky’s round helped reassure everyone that both the direct lines and optimum time were feasible.

“Starting off, it was the right choice to have Lynn go first," he said. "She rode with an ice-cold head. She executed the gallop when she could and jumped every fence to perfection. Her debrief was superb, so the information she came back with for the other riders was good. Doug Payne, on a very young horse, took more time to get around and did a super job. Same thing with Boyd, he was on an experienced horse, and was able to find his way back in time. Tamie was unfortunate. That horse has looked like nothing but a champion this whole week. It didn’t quite come off for her today. That is a horse for the future. There are no major concerns there.”

Lynn Symansky of Middleburg, Va. and RF Cool Play set off as path finders for the team, starting fifth in the overall order and reporting back valuable information to the rest of the team and Chef d’Equipe Erik Duvander on the strategy and rideability of the track.

RF Cool Play, an 11-year-old Gerrman Sport Horse gelding (Condors Champion x Radscha) owned by the Donner Syndicate, handled the intense atmosphere with ease and Symansky was pleased with their ride, which pushed them into second place individually.

“You don’t have the advantage in the beginning of knowing if the time will be easy or hard to make, so you have to go pretty quick just in case to make sure you don’t get down and can’t get back up,” said Symansky. “He’s such an honest cross-country horse. I don’t even know how many strides he left out in that first water. He held our line and fought for it to happen. He never lost confidence in the round and felt super on it. He had plenty of gas left in the tank and we had a good time out there.” 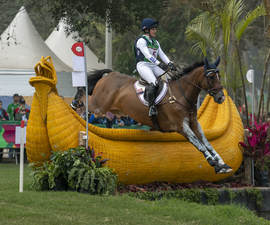 Lynn Symansky on RF Cool Play (Photo by Sarah Miller MacMillan photography)Tamie Smith of Murietta, Calif., and Mai Baum, a 13-year-old German Sport Horse gelding, ran into some trouble midway through the course, glancing off of the corner set at fence 16.

She pushed to make up time and was assessed an additional 20 penalties for crossing her track at the 23ab combination.

“Obviously, I’m disappointed because I had a run out at the corner," said Smith. "It all rode a bit rough and scrappy. I just tried to give him as strong of a ride as possible and he’s a good horse. I tried to keep going fast and end on the lowest score possible. I don’t think I could have done anything different. I just don’t think he read it. It’s a little bit how this course is.”

With the added tension to produce a strong score for the United States, Payne of Aiken, S.C., on Starr Witness, an 8-year-old Dutch Warmblood mare, produced an efficient and tidy trip, adding 8.4 time penalties to move forward on  36.4 to finish in fourth place individually heading into the final phase on Sunday, Aug. 4.

“It was excellent," said Payne. "Ginja is just a freak. She makes really easy work of anything that’s asked of her. The course rode right to plan. I went out thinking about Erik’s last words about coming home clear and spending the time you need to make sure that happens. That’s what we did, and she was excellent. To have a horse like this coming up, I mean she could be doing this for another 10 years. It’s very special and I feel very lucky.” 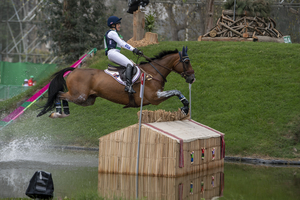 Martin rode with precision, but also the responsibility of completing their round to keep the team score intact, and his efforts were rewarded, as he heads into the final phase in first place individually on his dressage score of 25.6.

“It was very good, and this was a lot harder than I expected," said Martin. "I’m on a very experienced horse, and I walked it and I thought, ‘Holy moly, this is a tough track. I’ve put a lot of training into the horse and he gave me a great ride. I thrive on a bit of pressure and the time was a lot harder to get than I thought it was going to be.”