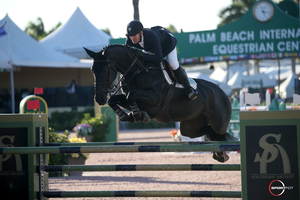 McLain Ward on Tradition de la Roque (Photo by Sportfot)Ward rode Tradition De La Roque to be the clear winner when the pair crossed through the timers in 33.27 seconds.

The victory is the second FEI ranking class win for Ward and the 12-year-old Selle Francais mare that was previously shown internationally by young professional Reed Kessler and is now being marketed by Ward.

“She has been great for us, and we are very lucky to have her in our stable,” said Ward. “She has been a real star down here and has now won several classes and had top placings in others, so we are really thrilled with her.

“I THINK Alan Wade is one of my favorite course designers in the world so I enjoy his tracks, and they always make sense to me,” Ward said. “As the first big class of the week, the route was probably a bit friendly but because it is a five-star it is also very fast.”

“I got to go at the very end of the class so I was able to see what was the smart risk and what was maybe the not so smart risk,” Ward said.

Kristen Vanderveen took the early lead in Wednesday’s class aboard Bull Run’s Prince of Peace, but her time of 35.981 seconds was unseated by Rodrigo Lambre of Brazil after several rounds, and she would finish in eighth place while Lambre and Mario Onate’s Chacanno finished sixth.

Fifteen trips into the line-up, Great Britain’s William Whitaker once again changed up the leader board clocking in at 35.32 seconds with RMF Echo to eventually place third.

As the fifth to last competitor, Diego Vivero of Ecuador took over the lead with the fastest clean round at the time in 34.97 seconds to finish second.

Slotting into fourth place was Erynn Ballard of Canada riding Ceitasi, while Karen Polle  and her own Little Lord 90 were fifth.