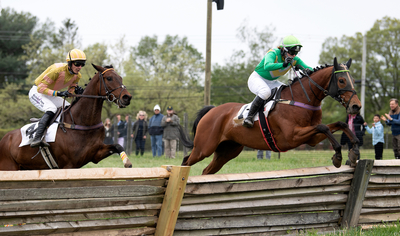 Withoutmoreado leads Boutonniere over last at Winterthur. You can see his front toe just clipping the top rail (Photo by Tod Marks)Winterthur has become an area favorite, so, despite the chilly Mother's Day that followed two days of rain, a large group of spectators still turned out, with plenty of tailgaters.

Withoutmoreado was being challenged by Boutonniere, trained by Leslie Young, when Boutonnniere fell at the last fence, leaving the field open to Withoutmoreado.

"I've had Withoutmoreado for about three years,"said Neilson. "I bought him from Hamish McCauley  in England. He fell in his first start for us three years ago, which set him back. Skylar has been incredible with her efforts schooling him. He's her favorite in the barn.

"HE WON at Geneseo last fall on a really wet day, so I was pretty optimistic about how he'd handle the going at Winterthur. After Geneseo, he was fourth at the Pennsylvania Hunt Cup, but I think he was tired after running in the deep going at Geneseo.

"This year, he won at Brandywine, and then he was third at the Grand National, where he jumped really well and was closing and almost got up to second.

"Still, I had a good bit of respect for the horses running at Winterthur," said Neilson. "Skylar gave him a great ride. She saved a lot of ground. He's entered at Willowdale, but I'm not sure he'll go there. If not, he'll go to Radnor.

"Boutonniere got into  a bit of soft going," said Young. "Then, when Withoutmoreado took off, he took off , too, and his front hoof just clipped the top rail, just enough to tip him over."

"Glencorrib Sky is an exciting young horse," said Neilson. "I took him to Aiken earlier this spring, and he got shipping fever, so he missed most of the spring races. He came from Ireland, so I though he'd like the soft going. He won at Colonial last year. He'll probably go to Radnor next."

Ballybristol Farm's Mercoeur (Fr), trained by Young and ridden by Freddie Procter, won the $15,000 Amateur or Apprentice Rider Timber race by 1 length over Royal Ruse, trained by Sanna Neislon in a two horse race, finishing in 6:38 4/5.

"Mercoeur is a lovely, versatile horse," said Young. "He's won a steeplethon.  He can do it all. I knew he'd like the soft going."

Junior Senator, owned by Naylor, trained by Cyril Murphy and ridden by Eric Poretz, went straight to the lead in the first race, the $20,000 Maiden Timber, opening up a times by over 40 lengths, and won by 30 lengths over Chosen Mate (Ire), trained by Ricky Hendriks, in 6:39.