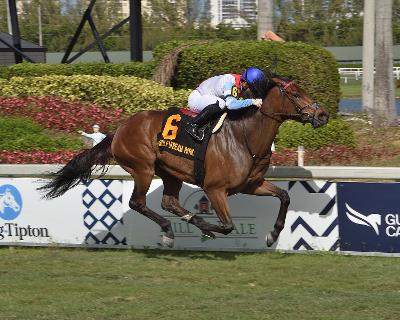 Mean Mary winning The Orchid Stakes (Photo by Adam Coglianese)Mean Mary won in her usual running fashion, leading gate to wire to win by a length in a mild drive, finishing in 2:11.73.

"She's been remarkably consistent,," said Motion, who has said that she was very difficult to train earlier.

"She's mellowed a bit now, but she's still a handful," said Motion. "I hadn't planned to run her in the Orchid. I had planned to save her for the bigger races in the summer."

Racing has been hammered by breakdowns, lambasted by animal activists like Peta, cancelled in many areas due to coronavirus and, in Pennsylvania, by Gov. Wolf's attempt to raid the breeders' awards, and everyone in worried about what effect a long cancellation of racing may mean to its future.

MOTION said he hasn't been affected so far by the lack of racing throughout the country.

But racing has been cancelled in Pennsylvania at Penn National and Parx, in Maryland at Laurel and in New York at Aqueduct, which as been reformatted into a hospital site.

"I'm pretty spoiled with my owners," said Motion. "But it's an expensive sport to be in to not be racing."

He said the only horse he has lost so far is Majestic Reason, whose owners decided to breed her rather than wait out the time until racing resumes.

Motion has around 20 horses in Florida, trained by assistant trainer Alice Clapham, and about 65 to 70 horses at Fair Hill Training Center in Maryland.

" A lot of the horses at Fair Hill are coming back from breaks over the winter, so it hasn't disrupted their schedule too much," he said.

Before racing was cancelled at Laurel, Motion had two winners there, Wertheimer and Frere's homebred Amanite in a $41,000, 6 furlong Maiden Special Weight for 3-year-old fillies, and Richard L Golden's Prevail in a $42,800, 1 1/16 mile Waiver maiden Claiming race.

Just Whistle passed the leader in the stretch but couldn't withstand the closing drive from Identifier.

Bernie Houghton said he hasn't been negatively impacted as of yet by so many tracks having been closed, either.

"So far, so good," Houghton said. "I've turned out a few, but I haven't lost any owners yet. But give it another month and it may not look so good."

Houghton has 30 horses at Penn National, where training has been restricted to five days a week.

"Nobody knows anything about when racing may start again," said Houghton. "But it's only been a few weeks. It definitely won't look so good in a month."