OZONE PARK, N.Y.--Owned by Pennsylvania based Cash is King Stable and LC Racing, Mischevious Alex won the  G3, $300,000 Gotham by 2 lengths to earn 50 points towards qualifying for the Kentucky Derby. 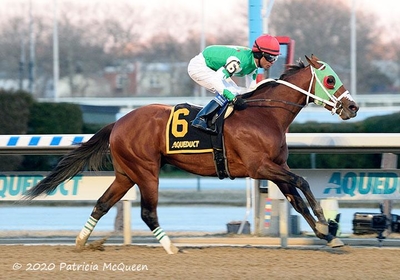 Mischevious Alex winning the G3 Gotham (Photo by Patricia McQueen)Mischevious Alex was the field's only graded stakes winner, having previously won the G3 Swale Stakes at Gulfstream, and posted his third consecutive victory following a 9 ¾-length victory in the Parx Juvenile in November before starting his sophomore campaign.

Making his first start at a NYRA track, the Into Mischief colt tracked the early speed in fourth under jockey Kendrick Carmouche and took command entering the stretch, completing the one turn mile in 1:38.80.

Chuck Zacney, founder of the Sirrus Group, a regional medical billing company based in Norristown, Pa., is the managing partner of Cash is King.

MISCHEVIOUS ALEX is named for Zacney's son Alex, as was the group's Afleet Alex, who was second in the Breeders' Cup Juvenile, third in the Derby and winner of the Preakness and Belmont Stakes. 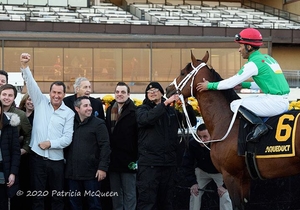 Cash is King celebrates Mischevious Alex win (Photo by Patricia McQueen)The only question is, who was responsible for misspelling mischievious.

"It was a great day for us. He handled the next step up really well and gave us a solid effort today," said Servis, whose only previous starter in the Kentucky Derby was a winning one with Smarty Jones in 2004. "We'll see how he comes out of this and Chuck and the other partners and I will discuss what's next. Ever since we put the blinkers on him, everything that we've handed him, he has handled very well."

With 50-20-10-5 qualifying points towards the Derby on May 4 at Churchill Downs to the top-four finishers, Untitled edged Attachment Rate by a head for second with Montauk Traffic fourth.

All three of Mischevious Alex's previous wins came in sprints.

"John pretty much told me this horse can do anything," jockey Carmouche said. "He sits pretty good or can go to the lead. He told me the horse is a rocket out the gate, so the best thing that I can do is to take advantage. He left out of there running and I didn't want to panic. I wasn't in a rush. I thought I had the best horse in the race, so I wasn't in a hurry. I was pretty confident in my horse and John. He just told me to ride the way I feel and win the race."

"We'll discuss it, but as long as he comes out of it well, I think it's worth taking a shot," Servis said.