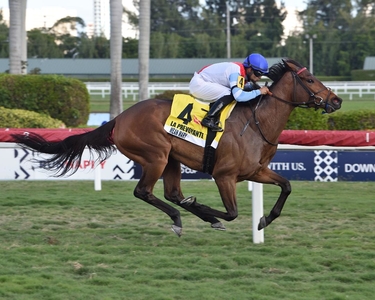 "It looked like it was going to set up that way," said Motion. "There wasn't any other pace in the race."

"I'm not going to be in any hurry to run her back," said Motion. "She's had a bit of a campaign. I may put her away for awhile. I'd like to have her for a big summer and fall campaign in those bigger races. I think she could be competitive in that division."

MEAN MARY has run five times since September with three wins and a second from five races and earnings of $201,000.

Campbell has a nice mare in Karlovy Vary, by Dynaformer, with Mean Mary her foal of 2016 by Scat Daddy and her foal of 2017, Bye Bye Melvin, by Uncle Mo, having just won an allowance race at Tampa Bay after winning a maiden race in December, also at Tampa Bay.

"We bought him at Timonium for quite a bit of money," said Graham of the colt by Flashback that was bought for $275,000.

Fast Master finished second and third in maiden races last spring, the didn't race again until Dec. 30, when he finished third again in a maiden race.

"He had some time off and came back quite nicely," said Motion. "We'll probably keep him in local allowance races."

Both horses were owned by Rodman Moorhead's Buttonwood Farm and both were claimed, Downhill Racer by Tim Kreiser and Colonel Moorhead by Demelza McMahon.

"That was the primary objective, to have them claimed," said Sheppard. "That's why we dropped them in so low."

Sheppard said the Moorhead was interested in campaigning horses that could run in top tier races.

Downhill Racer had been the Pennsylvania 2-year-old champion in 2016 but hadn't run well since.

UNION RAGS sired a pair of recent winners, Union Salute in a $27,000 Allowance race at Delta Downs on Jan. 23 and Saquero Row in the $100,000, 7 furlong Interborough for fillies and mares 4-years-old and up at Aqueduct on Jan. 20.

Saguaro Row, owned by Newtown Anner Stud Farm and breeder Mark Breen, won the Pumpkin Pie at the Interborough's distance of seven furlongs on Nov. 9 and ran a competitive second to Spiced Perfection in the 1 mile G3 Go for Wand on December 7.

Trainer Michael Stidham said before the race that the Union Rags mare should appreciate the shorter distance.

"The assistant told me before the race not to rush out of the gate and just to sit back and stalk from off the pace," jockey Lezcano said. "I broke running and let her sit in fourth. At the quarter-pole, when I asked her, she came swinging out and did it easy."

Since Stidham took over the training duties for her 4-year-old campaign, Saguaro Row has finished first or second in six of nine starts and could now target the G3, $250,000 Barbara Fritchie on Feb. 15 at Laurel Park.

"She's really found a home up there," Stidham said of Aqueduct. "When those horses like that course, I've found that you're smart to keep running on a track that a horse likes. Not every horse likes the winter track up there, but she seems to. She's a nice filly and she showed it today."