GRANTVILLE, Pa.--Tim Kreiser began 2020 the same that that he has ended the last six consecutive years, as Leading Trainer. 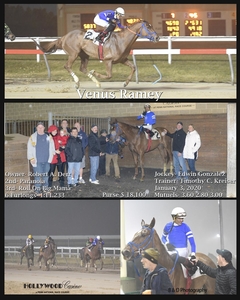 And he started his lead in 2020 in a dramatic way, by winning three races in one night on Jan. 2.

Winning three in one night has happened a few times," said Kreiser. "Let's go wire to wire as trainer."

"MY BARN'S not full now," said Kreiser. I have 46 horses when it's full. But one owner sold his 14 horses in early December. About a quarter of those I have are Pa-breds."

Second leading trainer was Kimberly Grace, with earnings of $1,192,906 from 80 winners from 469 starters, 83 seconds and 71 thirds for a winning average of 17 percent and win/place/show average of 50 percent.

Third leading trainer was Bernie Houghton, with earnings of $1,101, 327 and 47 winners from 237 starters, with 40 second placed and 44 third placed for a winning average of 20 percent and a win/place/show average of 55 percent.