Michael Matz has two winners, including Ebullient, at Gulfstream

HALLANDALE BEACH, Fla.--Michael Matz started off 2020 in the right way, saddling two winners in two days on Jan. 1 and 2 at Gulfstream Park. 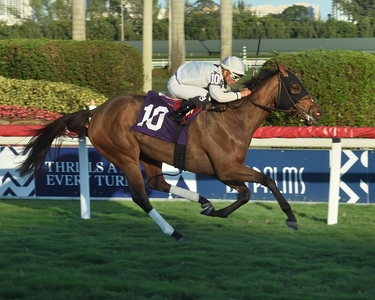 Ebullient"They were both tough races, so we were quite happy with both horses," said Matz.

"I've had Ebullient since she was a 2-year-old," said Matz. "She was a little late getting started. She had tendonitis. Then she acted liked she wanted to go long, but she never finished up well. Then when we ran her short, she wasn't fast enough."

"She worked like a real good horse in the morning, so we didn't know whether we just had a morning glory," said Matz. "We kept scoping her, and finally we tied down her tongue. In that race, I just told the jockey to let her go and see what happened."

SO JOCKEY Nik Juarez let her take over three wide into the first turn, moved inside after a sharp first quarter mile, kept widening the lead, was put to a drive in the stretch and finished well clear.

"We'll look and see what conditions come up next," said Matz. "There are a couple of stakes coming up. There's one at 7 1/2 furlongs at the end of the month, but that might be running her back a bit too soon."

"We always liked him as a young horse," said Matz. "He had bone bruising. He looked like the horse to beat in that race.Jose Ortz, his jockey, said he ran good. I've had a lot of the family, to I know them well."

Blameless is by Blame out of Dancing to Town, by Speightstown.

Sayyida Al Hurra tracked just off the pace, challenged for the lead on the turn and edged clear in the stretch to win by a 1/2 length.

Former Marine ran second early, moved outside the early leader while going three wide and surged to the front in late stretch to win by 3/4 length.