LAUREL, Md.--Dec. 28 was a pretty special day for Graham Motion as he saddled two stakes winners as well as two promising maiden winners, including one $100,000 stakes winner at Laurel. 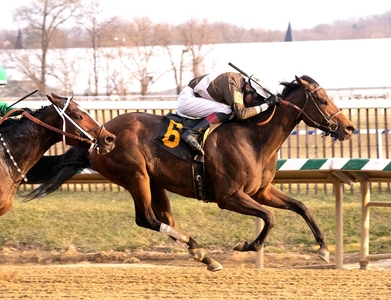 Majestic ReasonPeter Pugh had a winner a winner at Gulfstream the day before for a horse he, Wendy Hendriks and Margaret Dupree co-own.

Majestic Reason, bred and owned by Richard L. Golden and Mrs. Ellen Charles in Maryland, won the $100,000, 6 furlong  Willa On the Move Stakes at Laurel by 3/4 length.

"I've had her from the beginning," said Motion. "She's a homebred of Mr. Golden and Mrs. Charles, who is a big Maryland owner. They partner on one horse every year."

"She's been a really neat filly," said Motion. "She's very honest. She''s hit the board every time except the one time I took her to Aqueduct. I had considered giving her some time off, but there's a good chance she'll run in the Barbara Fritchey in the middle of February. That's Laurel's most prestigious race for fillies and mares. I'd hate for her to miss that."

MAJESTIC REASON, a 4-year-old, now has five wins, four seconds and two thirds from 12 starts, including two stakes wins, and earnings of $312,998.

"She came to be over the summer," said Motion of the 4-year-old mare bred and raced in Brazil, where she won a G1 stakes prior to coming to Motion.

"She ran a good third in her first race here on Haskell day, when they ran all the races late in the day because of the heat.,"  said Motion, "I had a bit of a hard time getting her back to her good form after that, so I was obviously very pleased with her win at Gulfstream."

"I won the same race, the Via Borghese, with Si Que Es Buena, the same short of horse. She was bred and raced in Argentina before I got her. It's sort of amusing to win the same race two years in a row with the same sort of mare.'

'i'll probably keep Touriga down in Florida for a stakes in February," said Motion.

"I like both of them," said Motion. "They're very nice. Both have shown promise. I wanted to avoid Gulfstream with them, becuase its so competitive there. I wanted to give themboth an easier race at Tampa to give them confidence."

I bought her a a 2-year-old in Ocala," said Hendriks. "Peter saw her and liked her breeding. She won a maiden special weight race in her second time out. Margaret Dupree wanted a part of her, so then the three of us owned her. Then she just had the worst luck. Either a race would come up deep going on the turf or she had a terrible trip. She finally made it. Where she goes next is up to Peter."