Houghton scores a stakes win, Hendriks and Motion have winners 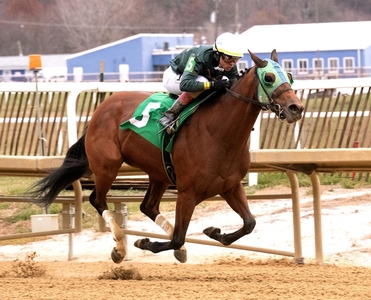 Vault winning at Laurel (Photo by James McCue)She was born at our farm," said Houghton, referring to his mother Betsy's Sylmar Farm in Christiana, Pa. "She's a half-sister to Mirth, who ran in the Breeders' Cup earlier this year."

By Jump Start out of Di's Delight, by French Deputy, 3-year-old Vault stalked the pace, took command in upper stretch and drew way to win by 3 1/2 lengths over Jehozacat, with Trolley Ride, also trained by Houghton, third.

In scoring her first stakes win, Vault has now run her record to five wins, four seconds and one third from 13 starts and has earned $188,614, but she didn't win for the first time until her fifth race.

"Like all Jump Starts, she was just a little slow in getting started," said Houghton. "But now, she just keeps getting better. She's a nice filly and nice to train, although she's a little strong galloping. She's down in Florida, in Ocala, now for a couple of months rest."

LARRY KARP, who owns Barlar LLC, is from Texas but races all his horses in Pennsylvania, and he has a friend with a farm in Ocala where he sends his horses for R and R.

"Larry likes the Breeders Awards in Pennsylvania, which is lucky for me," said Houghton.

Houghton also saddled Maiden Claiming race winners at Penn National, one on Nov. 29 and one on Dec. 4.

"Hank Nothhaft is from Texas, too," said Houghton. "Most of his horses are Pa-breds, although Noble Descendant is a Ky-bred. He was on the PHBA board of directors for a while."

My Mom bred My Lily Pad," said Houghton. Joe Hillman wanted a horse to race, so he came to us, and we sold him My Lily Pad. That was her second start. She was second in her first race."

RICKY HENDRIKS saddled Trace to win a $20,200, 6 furlong Allowance race for fillies and mare 3 years old and up at Mountaineer Racetrack in Ohio on Nov. 25.

Although Trace runs in the name of Debra Kachel, she is actually owned not only by Kachel but also by Hendriks, his mother Wendy and his daughter Lily.

Wendy Hendriks bought Trace at the Fasig-Tipton Kentucky sale last July or $57,000, and she has since finished fiftn, third, first and first, all in allowance races, and earned $33,556, almost paying for herself in her first four races for her new owners.

Hendriks' daughter Lilly is in her early 20s and is in the Darley Flying Star Program.

"The Darley program is a two year program in which the participants are sent all over the world and learn about all facets of racing from management to training and riding," said Hendriks. "Lilly just got back from spending time in Australia."

"I didn't go to Mountaineer," said Hendriks. "Brook Boyer took her out there for me."

Graham Motion saddled two Maiden Special Weight winners in Florida, one on Dec. 6 and one on Dec. 7.

Union Rags also had another stakes winners in Saguarro Row, trained by Michael Stidham, who won the $100,000, 7 furlong Pumpkin Pie Stakes at Aqueduct by 4 1/4 lengths on Nov. 9.