Bernie Houghton saddled a 2 y.o. Stakes winner and then three in one night

LAUREL, Md.--Bernie Houghton had a very good week, starting Oct. 19 with a 2-year-old Stakes win and culminating on Oct. 25 with three wins in one night, two of them for family. 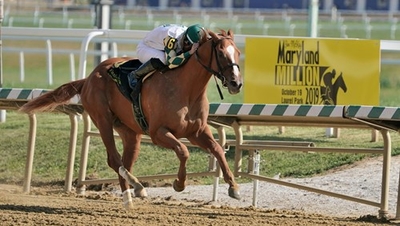 By Call Nation out of a Leading the Parade mare, Ournationonparade was bred by John E. Williamson III and finished second for Williamson in his first start in a maiden special weight at Laurel on Sept. 8.

"He ran real green there," said Houghton."He was looking at the stands. But he caught the eye of Dean Reeves, who bought him right after that race. He kept him with me and said to train him towards the Maryland Million."

"WE HAVEN'T decided where he's going to go next," said Houghton. "There's a couple of stakes later in the year, and maybe stretch him out a bit."

"It was a good day," said Houghton. "There were pony races between the races, and my son Thomas won the Small Pony Race on Lickety Split, the pony he won the Delaware Valley Point-to-Points on."

Houghton began his three race winning streak at Penn National on Oct. 25 with a win by his own Beyond the Bend, co-owned and bred by his W. M. T. Stable and his mother, Betsy Houghton's Sylmar Farm.

Beyond the Bend, by Jump Start, won his second start by 2 lengths in the $27,100 Maiden Special Weight at 6 furlongs for Pa-bred 2 year olds.

"I don't know where he's going to run next, possibly in the Nursery Stakes in November," said Houghton.

Houghton next saddled Edward J. Madden's homebred My Devils Child to win a $20,670 Maiden Claiming race for 2 year olds at 5 1/2 furlongs by 2 lengths in his second start.

"Ed worked for Michael Matz," said Houghton. "He's retired now. He helps me with my kids at horse shows. My kids love him. It's nice his homebred won."

Houghton's third win of the night came with his sister-in-law, Melissa Houghton's Messy Baker, who won a $10,800, 1 1/16 mile Claiming race for 3 year olds that have never won two races.

"Melissa's grandmother does a lot of baking," said Houghton of the name Messy Baker. "Melissa's always baking cakes, too."

Houghton also won a $16,400 Claiming race at 1 1/16 miles for 3 year olds and up that have never won four races with Ronald Dewolf's Pa-bred homebred Bolt Brotherhood on Oct. 19 at Penn National.

Bolt Brotherhood won after Midnight Act was disqualified for bumping him in the stretch.

"I've had Bolt Brotherhood since he was a 2-year-old," said Houghton of the 4-year-old that has now won four times with two seconds and six thirds from 19 starts.

Global Ambition won her first start ever by 6 3/4 lengths over a field of seven.