FAR HILLS, N.J.--Jack Fisher won two stakes at the Far Hills Race Meet, but it was horses from across the pond that ruled the day on Oct. 19. 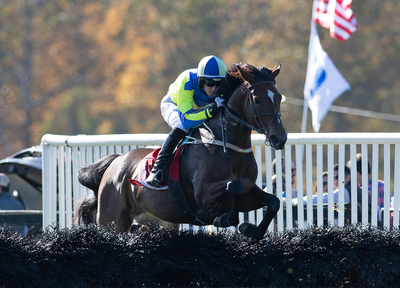 Snap Decision over a jump early in the Foxbrook Hurdle Stakes (Photo by Tod Marks)Horses that had been racing in England won three of the six races over fences, including the featured $450,000, G1 Grand National Steeplechase.

Brain Power (Ire), owned by Nicky Henderson, trained by Michael Buckley and ridden by Nico DeBoinville, won the Grand National by 15 lengths after the favorite, Wicklow Brave, fell at the last.

Fisher trained the second and third placed horses, Scorpiancer, who was a neck in front of Moscato, both owned by Bruton Street-US, and last year's winner, Jury Duty, finished fourth, 18 1/2 lengths further back.

"This must be one of the best Grand National fields ever assembled," said Mike Hansen, one of the partners in Bruton Street-US.

WICKLOW BRAVE suffered a broken shoulder and was humanly destroyed, a very sad ending for a great horse that won so much, including at Cheltenham and on the flat.

"What a thrill that was," said Buckley. "It was exciting for Mr. Henderson. He has tried to win Grand Nationals all over the world, from England to Ireland and France, and he finally won one after a long and illustrious career."

"Brain Power won at the Cheltenham meet in December," said Buckley. "Then he had the summer off. He had Lasix for the first time today."

"It was very sad the horse in front fell," said DeBoinville. "My horse gave me a great race. He loved the ground here, and he loved the fences. I can see him coming back here. It was fantastic that Me. Henderson won."

"This horse came to us off the flat," said McCarthy of Snap Decision, who is by Hard Spun, was bred by Phipps Stable and raced in allowance company on the flat.

"He's like driving a Ferrari," said McCarthy. "It took him a bit of time to get it together over fences, but I knew that if he could get it together that he had the engine."

"That was really exciting," said Hansen. "He was selected by Charlie Fenwick (another partner in Bruton Street-US). It's great to have to many great  foreign horses here. This is an American bred horse. Hopefully, we'll see more American bred horses at the top over fences."

Fisher also saddled Woodslane Farm's Pik Em, the longest shot in the field of 12, to win the last race of the day, the $50,000 Appleton Hurdle Stakes, by 3 1/2 lengths.

"He was a little slow away," said Mikey Mitchell, who rode Pik Em. "I had to bide my time. He went pretty impressively."

Mitchell's win put him in a tie for the Leading Jockey, Races Won, with Jack Doyle.

"It's good fun," said Mitchell of the race for the title.

Asked what he had done to improve Pik Em so much, Fisher said,"I put Mikey on him."

"It's been a great year," said Fisher of his being Leading Trainer with 31 wins over jonathan Sheppard with 15 wins. "I'm lucky to have great horses, a nice place to train and a great wife."

Global Freedom, owned by George Mahoney's Rosbrian Farm and trained by Gordon Elliot and ridden by Robbie Power, made the trip from England to win the first race, the $50,000 Gladstone Hurdle Stakes by  2 3/4 lengths.

"The course is in fantastic condition," said  Power. "He jumped a bit novicey, but the further the race went the better he went. He was a big amount of scope."

"Gordon thought he'd be a good fit for American racing," said Mahoney. "He got a top of the tree ride."

"Zanzi Win had been training well coming into this," said Hendriks. "He ran a good second to another of our horses at Saratoga before this."

Another foreign invader, Pravalaguna (Fr), owned by Bruston Street-US, trained by Willie Mullins and ridden by Paul Townend, won the $75,000 Peapack Hurdle Stakes for fillies and mares by 8 lengths over Cibourne, trained by Sheppard, who had been away from the races for two years.

Pravalaguna had been owned by Bruton Street IV, but the ownership was transferred to Bruton Street-US before the Peapack.

"It was our goal to run her here in a fillies and mares race," said Hankin, "She'd run well in Ireland, and she ran against the boys there. We thought we'd give here a chance over here."

"She's one of our better mares," said Patrick Mullins, who came to the U.S. to saddle the horse for his father. "This was a fantastic day. We'd never had a winner here before. We'd considered running her in the Grand National, but we thought she'd have a better chance in this race."