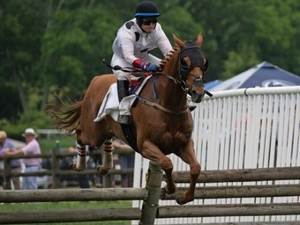 "Jack Doyle gave him a good ride," said Sheppard. "Jack's a good rider, but he excels over timber."

Codrington College arrived in this country in 2013 after three starts over fences in Ireland and began as a hurdle horse.

"It seem like he wasn't realizing his potential over hurdles," said Sheppard.  "He has a high cruising speed and a good jump, but he was jumping too high over the national fences."

So Swyer and Sheppard began to discuss what to do with Codrington College.

"Ed Swyer owned the horse himself then, and I was joking with him one day, and he said `I hate timber racing,' and I said `I do too."

After joking around, they decided to switch him to timber.

"So I got half of him," said Sheppard. "There wasn't any money that changed hands, but I only charge him half the training fee now."

SO SHEPPARD converted the horse to timber after he 2017 season, and Codrington College won his first start over timber, a Maiden Special Weight at Charlotte, on April 28, 2018.

Then in 2019 he finished third twice, at the Grand National and Iroquois before winning at Shawan Downs, so since being converted to timber he has two wins and two thirds.

While this is the only timber horse that Sheppard has had for while, he said that when he first started training in this country that timber horses were the backbone of his business.

"I used to have a lot of timber horses," said Sheppard. "Back in the day, I had riders like Paddy Neilson and Dixon Stroud, young timber riders, riding out for me."

"One year, I had 11 timber horses, and 10 of them had won by the end of the spring meets," he said. "I had a horse for Bettina Jenney that wasn't that easy a ride out hunting. He hadn't won, but someone found a nondescript meet somewhere, and we sent him and he won, so I had all 11 win over timber that spring."

"He's a lovely horse," said McCarthy of Elfitz. "They got him from Michael Matz. He didn't win on the flat. He was super fit. All Jack's horses are fit. He's been leading a the schoolings at home. He's a confident little horse. He's a brother of Schoodic."

Leslie Young also had two winners, one for Sharon Sheppard, Khafayya (Ire), ridden by Tom Garner, who won the $30,000 Sport of Kings Maiden Hurdle by 7 lengths.

"He's still only a 7-year-old," said Garner. "He was second at Fair Hill. I did fancy him today."

Young's second win was with Ballybristol Farm LLC's Mercoeur (Fr), ridden by Doyle, who won the $15,000 Maiden Timber by 11 lengths.

Skylar McKenna had her first sanctioned win on Sally Read's It's Nothing, trained by her mother, Kathy Neilson.

Skylar returned to be interviewed soaking wet after the traditional bucket of water over her head greeted her as she dismounted.

"It was a nice pace early on," said Skylar. "My horse jumped really well."

Iranistan looked to be a rising star over hurdles before he was hurt, and now returns for the fall races over fences.