BENSALEM, Pa--Bernie Houghton's own homebred Trace of Grace won the $100,000 Plum Pretty Stakes at Parx on Sept. 21, beginning a week in which he saddled six winners, including two in allowance races. 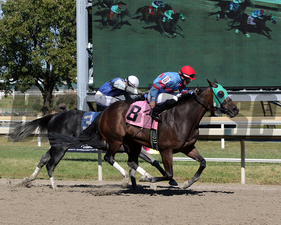 Trace Of Grace winning the Plum Pretty StakesIn the same week, Call Paul and Weed Wacker each won $100,000 Stakes, and Jonathan Sheppard had a winner.

"I had a good week," said Houghton.

"Trace of Grace is named after my youngest," said Houghton of his 6-year-old mare who also won the Plum Pretty Stakes in 2016. "She's running good, so I'm going to keep running her for now. Maybe run her another year, but I'm definitely going to keep her as a brood mare."

Trace of Grace, up close throughout the 1 1/16 mile race, went to the lead midway on the final turn and edged away to win by 1/2 length.

The Pa-bred Pictor won a $42.000, 6 furlong Allowance by a head after leading throughout most of the race.

"HE'S A VERY, very fast horse," said Houghton. "He didn't pan out a good as I thought he was going to. I thought he could win a stakes. But he had a couple of disappointing races. It looks like he got back on track in that race."

Rated up close, Vault quickly moved to the front on the final turn and won by 10 lengths, well in hand.

"I took her to a stakes race at Presque Isle, but she didn't like the going," said Houghton. "She's always run good on the dirt, so I'm happy to have a dirt horse at this time of year. I think she'll win a stakes. I do like her."

"She was my Mother's horse," said Houghton, referring to Betsy Houghton, who bred Vault at her Sylmar Farm in Christiana, Pa. "Lee was looking for a horse, so we sold her to him. "I've had horses for him for a while. He has one horse at a time."

"She's owned by my brother Michael's wife Melissa.," said Houghton of the 3-year-old gelding that won the  1 milE and 70 years races by 1 3/4 lengths. 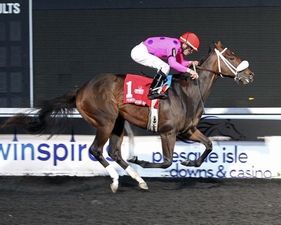 By Artie Shiller out of a Golden Missile mare, Weed Wacker is now two for two, having won a Maiden Special Weight at Presques Isle on Aug. 13 at fist asking, and she's now earned $78,000.

Up close throughout the race, Weed Wacker moved outside the leader  into the stretch and drew off to win by 3 1/4 lengths.

CALL PAUL, bred Pennsylvania by Beezie Patterson and Vicky Schowe and owned by Michael Dubb, David Simoon and Bethlehem Stables LLC and trained by Jason Servis, won the $100,000, 6 furlong New Castle Stakes for Del-bred or Certified 3-year-olds and up on Sept. 28.

Call Paul, who led for the whole race, sparred much of the way with Threes Over Deuces, putting him away at the quarter pole and drawing away to win by 3 lengths.

Call Paul now a 3-year-old, has six wins, five of the stakes, one second and three thirds from 12 starts and $546,020 in career earnings.

SHEPPARD saddled his own Juluca to a dead heat win in a $34,000, 1 mile and 70 yards Maiden Special Weight turf race at Delaware Park on Sept. 23.

Bred by Sheppard in Pennsylvania, Juluca was brushed lightly by Champagne Horizon late in the stretch but held on to dead heat with her.