LAUREL, Md.--Graham Motion saddled three winners and a second in stakes races at Laurel on Saturday, Sept. 21, including one from the great family bred by Isabella de Tomaso. 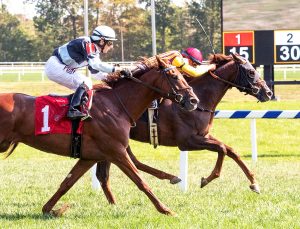 Irish Mias and Torres Del Paine finish one, two in the Futurity at LaurelNJ-bred Irish Mias, by Sky Mesa out of Irish Score, a half-sister to Irish War Cry, won the $200,000 Laurel Futurity for 2-year-olds at 1 1/16 miles on the turf by a head, beating Torres Del Paine, also trained by Motion.

Irish Score, an allowance winner, is out of Irish Sovereign as is the multiple stakes winner Irish War Cry.

De Tomaso is the aunt of Bambi Glaccum, who is secretary of the Plantation Field events.

"Irish Mias is very precocious," said Motion. "We took a bit of a chance entering a maiden in a stakes race, but we thought he'd like the grass."

IRISH MIAS stalked the pace, found room inside his stablemate in mid-stretch and went on to win by a head with Torres Del Paine another 3/4 length in front of third placed Doc Boy. 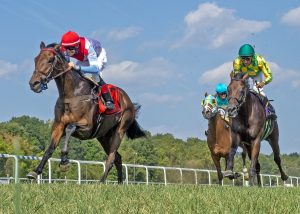 Alex G. Campbell bred and owns He's No Lemon, who has now won three times with one second and two thirds from eight starts and has earned $184,805.

"I've had He's No Lemon since he was a 2-year-old," said Motion "He's a horse we've always liked. He's found new life now in longr races."

This was He's No Lemon's first stakes win after winning an allowance optional claiming race at Saratoga in July and breaking his maiden at Tampa in February.

He settled off the pace, swung six wide on the turn and closed gamely for the win by 1 length. 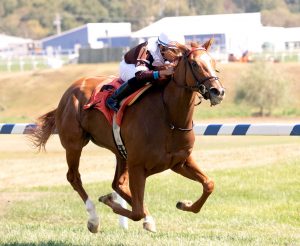 "Sharing was bred by Sagamore Farm and sold as a yearling," said Motion. I trained her mother."

Sharing is by Speightstown out of Shared Account, by Pleasantly Perfect.

Sharing stalked the pace down  the backstretch, and drew away in the stretch to win by 2 1/2 lengths.

Bernie Houghton saddled Trace of Grace to win the $100,000 Plum Pretty Stakes for Pa-bred fillies and mares at 1 1/16 miles at Parx on Sept. 21, and he also saddled Trolley ride to be second.

Sheppard saddled KMSB Stable's High Sierra to win an $18,800 Claiming race at 1 mile and 70 yards on the turf at Penn National on Sept. 21.

High Sierra settled outside, rallied two wide around the turn and was clear late to win by 1 length.

Md-bred Outofthepark, who was not entered to be claimed, won the 1 mile turf race  by 4 1/2 lengths.