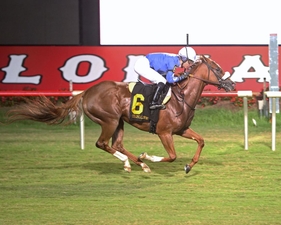 Dickinson was at Woodbine on Sept. 8 to saddle George Strawbridge's homebred Lift Up win the $100,000 Belle Mahone Stakes at 1 1/16 miles for fillies and mare 3-years-old and up  on the all-weather track.

"George and Julia weren't there, but George was over the moon when he heard that Lift Up had won," said Dickinson. "It was exciting."

"I have three fillies for George, and my goal is for each of them to win a graded stakes before the end of the year," said Dickinson. "Pamina has won a graded stakes, and both Theodora B and Lift Up have placed in graded stakes. They are three lovely fillies."

"I'VE HAD Lift Up since she was a 2-year-old," Dickinson said. "She's won seven races."

"All three are due to run at the end of this month, at Delaware, Laurel and Monmouth, but we haven't decide yet which one is going where," said Dickinson.

Unhurried early on in the black type Belle Mahone Stakes, Lift Up closed three to five wide through the far turn, rallied late and was up to win by a neck under a drive.

Lift Up now has seven wins, including two black type stakes and a listed stakes, five seconds. including a second in the G2 Dance Smartly Stakes at Woodbine on June 29, and one third from 17 starts and $330,985 in career earnings.

Dickinson had two other winners in early September, John E. Teas, Jr.'s Bayberry, who won by 3/4 lengths in a $28,900 Allowance Optional Claiming turf race for fillies and mares at 5 furlongs at Penn National on Sept. 4, and Stephen E. Post's Rumors of Violence. who won by a nose in a $27,000 Claiming turf race at 1 mile at Parx on Sept. 8.

BARCLAY TAGG saddled Ann M Backer's Ferdinanda to win the $100,000 Brookmeade Stakes for Va-bred fillies and mares 3-years-old and up at 1 1/8 miles on the turf.

Ferdinanda settled off the pace, angled four wide into the stretch and drew off to win by 6 lengths to be impressive in her first stakes win. 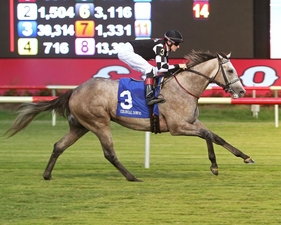 Embolden (Photo by Coady Photography)Embolden, owned by Dare to Dream Stale LC and trained by Michael Stidham, won the $100,000 Jamestown Stakes for Va-bred 2-year-olds at 5 1/2 furlongs, leading all the way to win by  3 3/4 lengths.

Holly Hundy, owned by Holly and David Wilson and trained by Vladimir Cerin, won the $100,000  Camptown Stakes at 5 1/2 furlongs on the turf for Va-bred fillies and mares.

Holly Hundy pressed the pace under confident handling and drew off to win by 3 3/4 under a mild drive.

Coming three wide into the stretch, Boldor drew  off under a drive to win by 3 lengths. 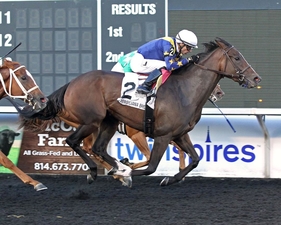 Ledecka (Photo by Coady Phoography)Bred by Blackstone Farm LLC, Ledecka, by Tiznow out of a Langfuhr mare, ran third early in the race, came through on the inside into the stretch, angled out for racing room and edged up late to win by 1/2 length.

This was Ledecka's first stakes win, and she now has two wins and two seconds from five starts and $111,600 in career earnings.

Up close throughout the race, Mr. Ritz went to the lead in the stretch and won by 1 1/4 lengths.

The 4-year-old colt now has five wins, including two listed stakes wins and a win in the G3 Seagram Cup Stakes at Woodbine in August, two seconds and one third from 10 starts and $374,690 in career earnings.

A K's Song broke a step slow, came through inside into the stretch and drove clear to win by 1 1/2lengths.

Michale Matz had a winner for Emory A. Hamilton on Sept. 7 at Colonial Downs.