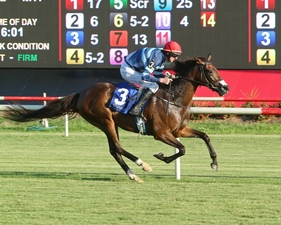 Snowie Hill (Photo by Coady Photography)Colonial Downs has been a terrific boon for steeplechase owners and trainers, offering at least two races over fences a week during the late summer months.

Snowie Hill was bred in Ohio by Parker, who is partnered with Sean Clancy in Riverdee.

The 4-year-old mare is named for Parker's mother, Frances Snowden “Snowie” Hill Myers, and her full sister Get Ready Set Goes, the 2016 novice champion who was bred by Myers, finished seventh in the Randolph Rouse.

"I just got Snowie River this summer," said Clancy. "The Parkers and Myers are a great family. Hill sells real estate in Lexington, Ky. He's the epitome of the do-it-yourself horseman."

"I'VE HAD Riverdee for about 10 years," said Clancy, who, with his brother Joe puts out the Saratoga Special daily during the Saratoga racing season. "This is our best year by far. Snowie Hill is just a 4-year-old, but she's run some good races. The only logical next spot for her would be at Far Hills." 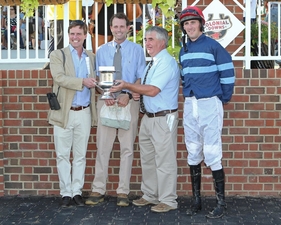 Sean Clancy, F. Hill Parker and Jack Doyle (Photo by Coady Photography)Snowie Hill broke her maiden for Parker on the flat on May 27, 2018 in a 6 1/2 furlong race at Belterra Park, where she also finished third in the Vivacious Handicap before switching to hurdles in September of that year.

Clancy got a share of her after she placed sixth in the Margaret Currey Henley Hurdle Stakes at Iroquois, and the mare won the Maiden Special Weight at Colonial Downs on Aug. 17 for Riverdee.

Snowie Hill was rated inside in the Rouse behind front runner Wigwam Baby, trained by Jonathan Sheppard, who finally finished fourth.

Snowie River cut the corner into the stretch and drew away to win by 3 1/4 lengths over owner/trainer Bethany Baumgardner's Mavourneen, with KMSN Stable's Inverness, trained by Keri Brion, another two lengths back in third.

Iconic Artist race three times over fences in 2017 before being sidelined for two years.

This was the 8-year-old gelding's first start this year. and he won by  2 3/4 lengths over the favorite, Riverdee Stables’ Gostisbehere, trained by Jack Fisher, who was a neck ahead of Bon Nouvel Chasers’ Sudden Victory, trained by Julie Gomena.